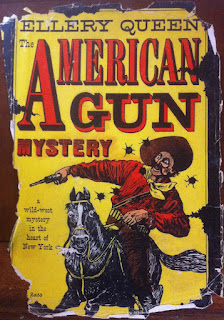 The American Gun Mystery appeared in 1933 and was the sixth of the Ellery Queen mysteries. And it’s a rather controversial one among fans of golden age detective fiction.

This is a story about cowboys and cowgirls and six-shooters and horses and roping steers and all that sort of stuff, but it’s set in New York City. Wild Bill Grant’s rodeo and wild west show has come to town. The venue is the Colosseum, a gigantic sports arena operated by promotor Tony Mars. As a special extra added attraction the show will feature former cowboy movie star Buck Horne doing an exhibition of trick riding and sharpshooting.

On the opening night Inspector Richard Queen of the NYPD and his son Ellery just happen to be in the audience. The show takes an unexpected turn. Murder was not part of the program but murder does take place, in full view of 20,000 witnesses. And in spite of all those witnesses, and in spite of Inspector Queen’s decision to seal off the Colosseum so that not a single soul is able to leave until the mystery is cleared up, the mystery is not cleared up. The identity of the killer remains unknown, the details of the murder remain obscure and most exasperatingly the murder weapon cannot be found.

The victim was shot. Lots and lots of guns are found. But not one of these guns is the murder weapon. The various participants in the show were all carrying guns and during the course of the show they all fired their guns but since this is a Wild West Show their guns are all large-calibre revolvers. The fatal shot came from a .25 automatic.

This is not quite an impossible crime story but it does have tendencies in that direction.

The controversial element I alluded to earlier is the puzzle of the missing gun. When Ellery finally reveals the solution to that part of the puzzle many readers find themselves disappointed or even enraged. The objections to the solution are that it’s silly, it’s implausible or that it’s a cheat. It is certainly silly. It does stretch plausibility to the limit. As to its being a cheat, that’s a matter of opinion. There is a very definite clue that points to the solution but the solution itself is so outrageous that very few readers are going to grasp the significance of the clue. I’m personally inclined to feel that the solution to the missing gun puzzle is not very satisfying and is even just a tad irritating.

It must however be pointed out that the missing gun puzzle is only one minor part of the story. In fact it’s not important at all as far as the solution of the murder mystery is concerned. The finding of the gun only matters insofar as it will be difficult to get a conviction in a murder case without a murder weapon.

Another possible weakness is the motive which is not revealed until the final page, although admittedly there are clues that make the motive (mostly) plausible.

Then there’s Ellery himself. Many readers seem to dislike him intensely. He does have certain affectations, he does love showing off his erudition, he can be high-handed and he does have the habit of not letting people know how much of the puzzle he has already figured out. He’s like a younger and more callow version of Philo Vance. On the other hand he is a young man and it’s hard to dislike a young man for having the faults of youth. I like him but your mileage may vary.

So this book does have its flaws. It also has considerable strengths. Circuses and theatres provide wonderful settings for murder mysteries and a Wild West show works every bit as well. These are strange self-contained worlds filled with colourful eccentrics who have their own distinctive codes of behaviour and even honour. In this case the authors have enormous fun with the whole Wild West thing and they throw in elements of other equally bizarre sub-cultures. Among the assorted possible suspects are gambling joint owner Julian Hunter, prize-fighter Tommy Black and movie star Mara Gay while both Buck Horne and his daughter Kit are or were stars of Hollywood cowboy movies. There’s also a glimpse into the fascinating world of newsreels (which provides a valuable clue). And the fact that the Wild West world has been transported to the middle of New York City adds to the fun.

The plotting is typical early Queen, extremely complex but with plentiful clues and apart from the disappearing gun it holds together well enough. This is a flawed Ellery Queen but while the flaws in The Spanish Cape Mystery proved fatal The American Gun Mystery is mostly successful if you overlook that pesky and annoying little .25 automatic. Generally enjoyable, although not as good as The French Powder Mystery, The Siamese Twin Mystery or The Greek Coffin Mystery. Recommended.
Posted by dfordoom at 10:46 PM