The Case of the Three Strange Faces 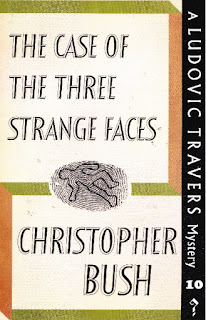 Christopher Bush, an extremely popular writer from the 1920s right through to the late 1960s, has been in the past half century one of the most unjustly forgotten of the golden age masters of detective fiction. All of which is about to change, with Dean Street Press announcing their intention of re-releasing all sixty-three of his Ludovic Travers mysteries. They have already issued the first ten. And the best news of all is that they’re being published as actual books, not just ebooks. The Case of the Three Strange Faces, originally published in 1933, is one of the titles already released.

Even by the standards of the golden age this is an elaborately plotted mystery. The plot twists and turns, and then it twists and turns some more, and then it just keeps on twisting and turning. The plot is so complex that one can’t help wondering if the author is going to succeed in keeping all those balls in the air at the same time. But he manages to do so.

One of the conventions of the golden age detective tale is that the detective hero always somehow seems to be right on the scene when a murder is about to take place. This novel pushes that convention even further - murder is committed in a compartment on a train, and committed while Ludovic Travers is in that very compartment. Unfortunately even detectives need to sleep occasionally, and Travers sleeps through the murder.

And a puzzling murder it is. Or is it two murders? Is it one crime, or two? Whatever the case may be it is clear that someone in the compartment must be the killer, and yet that seems difficult to believe.

The murder occurs on board a train in France but the victim is English so both the Sûreté and Scotland Yard are involved in the investigation. As luck would have it the Yard assigns Travers’ old friend Superintendent George Wharton to the case.

The investigation takes place in both France and England, with the Sûreté and Scotland Yard co-operating closely but having very different ideas about the nature of the murder (or murders).

Mysteries and thrillers set on trains are (to me at least) always great fun and Bush uses the setting skilfully in building up the possible murder methods and not just for atmosphere.

To a purist this might not be quite an impossible crime story or a locked-room mystery but it does have some elements associated with those sub-genres. The crime might not be impossible but there’s no immediately apparent satisfactory explanation for how it was carried out.

There are also doubts about identity, and there are some complex alibis to deal with. It’s always fun when an author of this era throws in one of those wonderful clichés of the genre, things like hitherto unknown poisons and such delights. In this book Bush throws in a whole grab-bag of such goodies. There are times when truly nothing succeeds like excess and this is one of them.

Ludovic Travers and George Wharton (at least in Bush’s 1930s mysteries) comprise one of the few genuine teams in detective fiction. They’re both equally clever detectives and there’s a great deal of mutual respect between them. In this case it’s Wharton who makes the running for most of the story.

Criminals habitually get themselves into trouble by telling lies. Once you start telling lies you have the problem of keeping your lies straight and sooner or later you’ll make a mistake and those lies will convict you. In this tale the police tell just as many lies as the criminals, and they also discover that it can be a dangerous practice. You can find yourself trying to be too clever and you can discover that you’ve painted yourself into a corner. The police of course believe they have every justification for not being entirely truthful but the dangers are still real. In this instance George Wharton gets himself into a very tricky situation indeed.

The Case of the Three Strange Faces is extravagantly plotted but it holds together and it’s a wonderfully gripping story. Highly recommended.
Posted by dfordoom at 12:47 AM