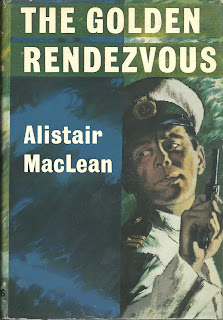 Alistair MacLean was well and truly on a roll when he wrote his eighth novel, The Golden Rendezvous, in 1962. It’s fairly typical of his output at this time, with first-person narration, some wry humour and plenty of atmosphere.

In normal circumstances the SS Campari is a fairly happy ship. It’s a kind of tramp steamer, but a very superior type of tramp steamer. It carries both cargo and passengers and the passengers (and the Campari’s passengers are all very rich) enjoy standards of luxury that put the ship in a class of its own. A happy ship normally, but not at this time. The Campari’s latest voyage has been nothing but frustrations and headaches. It all started with a curious event that had nothing whatever to do with the ship. An American scientist suddenly disappeared, taking with him the prototype for a new nuclear weapon. Circumstances suggested that he might have made his escape on board the Campari. A thorough search proved that this was not the case but the search disrupted the ship’s sailing schedule and left the officers and crew decidedly disgruntled.

In fact their troubles have only just begun. A crew member disappears; another is murdered. And worse is to come. Much worse.

The hero, the Campari’s First Officer John Carter, is a typical MacLean hero. He’s tough and determined with a streak of ruthlessness but he’s fallible. He thinks he’s figured out what is going on on board the Campari but while he’s partly correct he’s partly incorrect, and his incorrect inferences prove to be costly.

There’s never any sex in a MacLean thriller and there’s usually not a great deal of romance. MacLean knew his strengths and weaknesses as a writer. He was superb at atmosphere and action but love stories were not his forte. The Golden Rendezvous though has a bit more romance than most of his novels, and (by MacLean standards) a reasonably interesting heroine. Susan Beresford is an unlikely heroine and an unlikely love interest for First Officer Carter. She is rich. Very very rich indeed. And very spoilt. Carter dislikes her on sight but in the course of the adventure they seem to be continually thrown together and she turns out to be a young woman with a bit more substance than initial impressions would have suggested. As Carter grows to like her more he finds her even more disturbing. She is not only rich but also exceptionally beautiful.

The plot is rather far-fetched, but that’s no great fault in a thriller. It’s ingenious, and that’s what matters.

Many of MacLean’s best books have nautical themes. He had a very deep feeling for the sea. This was matched by his ability to convey not so much the romance of the sea as the perils and hardships associated with ships and the sea. He loved the sea but knew what it could do to men.
You can practically smell the sea in his maritime thrillers. In a MacLean sea-borne thriller the sea it as much an enemy, and as much a character, as the villain.

Speaking of villains, this book has a full-blown conspiracy that is (unusually for MacLean) almost reminiscent of Ian Fleming. The chief villain is not the larger-than-life character Fleming would have made him. He’s cold and calculating and grimly efficient.

MacLean was not exactly renowned for his skill in characterisation. This time however he does manage to create a few interesting minor characters who could have been very stereotyped standard types but instead they have a a few interesting quirks to them.

And there is of course plenty of action. It starts with a mystery and a sense of foreboding but by the halfway point it’s full-scale mayhem. There’s an impressive body count - by the time the story is finished, very impressive indeed. There’s not just murder, but piracy and other intended crimes that make mere piracy seem almost trivial.

MacLean often included surprisingly elaborate mystery elements in his thrillers. At the very least he always liked to keep at least one surprise up his sleeve. The Golden Rendezvous is no exception although the mystery angle is considerably weaker than in some of his other books.

I wouldn’t put this novel in quite the same league as Night Without End, Ice Station Zebra or Fear is the Key but The Golden Rendezvous offers plenty of thrills, suspense and excitement. Recommended.
Posted by dfordoom at 4:38 AM