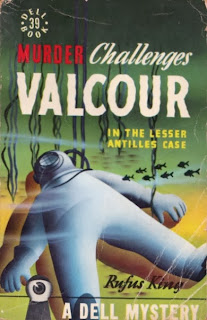 During the 1930s Rufus King wrote several mysteries featuring Lieutenant Valcour of the New York City police. Three of these novels had a maritime theme, The Lesser Antilles Case being the third.

The story opens with the survivors of a disaster at sea arriving in New York. Ten people (out of 43 passengers and crew) survived when the yacht Helsinor hit a reef near a tiny unnamed island. The problem is that by the time their lifeboat was picked up only eight people were aboard. And none of the eight could explain what had happened to the other two.

This is enough to attract a certain degree of police attention and Lieutenant Valcour is assigned to the case. He soon discovers other puzzling aspects to the survivors’ stories. They were all asleep at the time the two missing men disappeared. So soundly asleep that the most obvious explanation would seem to be that they were drugged. And a few hours before the Helsinor went down the chart (the chart covering the area of ocean they were cruising) was mislaid. Valcour might be no sailor but he knows that the one thing that does not get mislaid on a ship is a chart.

The two men who are missing presumed dead are the very wealthy owner of the yacht, Lawrence Thacker, and the yacht’s third mate. The survivors include several of Thacker’s relatives and friends, all of whom stand to inherit a great deal of money on his death. There’s also a slightly mysterious numerologist who had gained a considerable influence over Thacker.

The reader of course has no more actual knowledge of any of these events than does Lieutenant Valcour. Like the detective we have to piece the story together from the sometimes conflicting and often hazy recollections of the survivors. And the story is far from over. The unfortunate voyage of the Helsinor will have unexpected and fateful consequences, and there is another voyage yet to come. The voyage of the Helsinor II will be an attempt to unravel one mystery but may well provide mysteries of its own, and possibly more murders.

It has to be said that there is one key plot point that may stretch credibility a little. King’s attempt to make it plausible is certainly ingenious and interesting and he just about gets away with it. That’s really the only major reservation I had about this book. Other than that it’s a well-executed example of the golden age detective tale. There are clues in abundance but King knows how to keep the reader guessing.

Lieutenant Valcour belongs to what might be called the bland detective sub-type, the kind of detective favoured by authors who prefer to keep the detective in the background in order to keep the focus on the plot and on the suspects. It’s a perfectly valid approach and King does have the ability to make his suspects a fairly interesting lot. Even very minor characters are given their own flavour with Mr Stumpf the deep sea diver being particularly memorable.

This is my second Rufus King detective novel. I read Murder By Latitude (another maritime mystery for Lieutenant Valcour) a while back. So far I have to say I’m rather impressed by Rufus King.