Mickey Spillane’s Vengeance Is Mine! 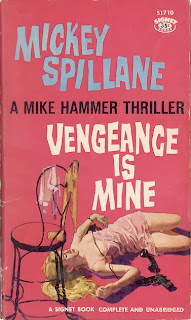 Vengeance Is Mine! was the third of Mickey Spillane’s Mike Hammer novels and appeared in 1950. It follows the usual Spillane formula - lots of action, lots of quite graphic violence and lots of fairly sleazy sex. And it has to be said that it’s an entertaining formula very well executed.

As customary Spillane throws the reader straight into the action, with a murder on the first page. A salesman from out of town has been killed by a gunshot wound to the head and the only possible witness was too dead drunk to remember anything. That drunken witness was in fact Mike Hammer! Hammer initially finds himself a suspect but the DA soon decides the case was a clear-cut suicide. Hammer is off the hook, or he would be except that his gun was the one used by the suicide and that’s enough for Mike to lose his private investigator’s ticket.

The dead man was Chester Wheeler. He and Mike had been acquaintances in the army and they’d got together to have a few drinks. Well actually rather more than a few drinks. Hammer is willing to go along with the DA’s ruling until he spots something very odd. Only one shot was apparently fired but there are only four rounds left in his automatic. And he always has six rounds in his gun. That discrepancy is enough to tell Mike that something is very wrong with this case and his investigations will soon start to point towards murder.

Of course Mike can’t investigate the case without his private investigator’s ticket but fortunately his faithful secretary Velda has a PI’s ticket in her own right. For the time being Velda will be technically in charge of the agency and Mike will be working for her and in fact Velda does take a very active role in this investigation.

Their investigations lead them into a sleazy world of high-priced models, fashion photographers, gambling joints and gay bars. As usual Mike gets some valuable help from his buddy in the police force, Captain of Detectives Pat Chambers.

Naturally there are quite a few dangerous glamorous women involved in the case and naturally Mike gets pretty close to the. In fact very close indeed.

The Mike Hammer-Velda relationship was always an interesting one. It’s one of those relationships where you figure the two of them really should end up together if only they could both admit the fact to themselves and if only other things didn’t keep getting in the way. Velda was always more than just a secretary, being a competent detective herself. This novel gives Velda a chance to really show what she can do and she proves to be tough and resourceful and more than willing to shoot any bad guys who get in her way.

Spillane was seen at the time as an author who changed the nature of the murder mystery genre by adding a lot more action and by upping the content of sex and violence to a very considerable degree. That’s certainly true but Spillane was in fact in other ways rather a traditionalist. Despite all the action the centrepiece of the book is a classic detective story puzzle plot and Mike Hammer, like any good detective hero, has to rely on his brains rather than just brawn to solve the case. Spillane might not have been one of the great masters of detective story plotting but he was quite competent in that area.

Mike Hammer was also a more traditional detective than first impressions might suggest. His methods might not have been approved by some of the great fictional detectives who preceded him but his attitude towards crime was fundamentally the same as theirs. He did not believe that murderers should be allowed to get away with their crimes. In this particular case the victim was not an especially close friend, nor was he a hero or a saint. Chester Wheeler was just a fairly ordinary guy, and that’s enough to make Mike Hammer determined to track down his killer whatever it takes. Hammer’s morality may seem old-fashioned today (which personally doesn’t bother me) but he has to be respected for living by his moral code even when it involves paying a high price.

Whether you like Spillane’s very forthright style and his aggressive and forceful hero is a matter of taste. Spillane doesn’t get a great deal of praise for his literary skills which is perhaps an injustice. His prose is direct and effective and captures the mean streets atmosphere of New York’s hidden criminal world with remarkable vividness.

Vengeance Is Mine! might not be to everyone’s tastes but Spillane fans will find that it delivers the goods. If you’ve been put off Spillane by his reputation it really is worth giving him a try. He may surprise you. You may even like him. Recommended.
Posted by dfordoom at 8:24 AM