The Man Who Missed the War 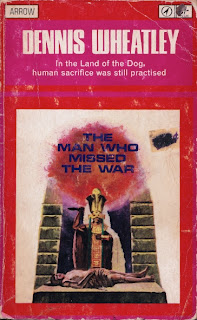 Dennis Wheatley’s novels were often outrageous in both concept and plotting, and The Man Who Missed the War is Wheatley at his most outrageous. His great gift was that he could take an utterly unbelievable plot and sell it. The more outlandish the plot the more enthusiasm he displayed in telling it.

The Man Who Missed the War was published in 1945. It’s both a lost world novel and a novel about the war. That might sound like an unlikely combination but such was Wheatley’s imagination that he was able to combine these two contradictory ideas with remarkable cleverness.

In 1937 a young man named Philip Vaudell can see that war is inevitable. He wants to play a role, but not necessarily a conventional one. His father is a naval officer and so Philip is understandably somewhat obsessed by naval strategy. He is convinced that Britain cannot win a war unless she can keep the Atlantic sea lanes open and he has come up with a bizarre but ingenious idea for doing this. Rafts. Huge convoys of rafts. Let the U-boats try to sink those! His father thinks it’s a mad idea and the Admiralty agrees but Philip’s friend Canon Beal-Brookman encourages Philip to press ahead and to form a company to prove the feasibility of the idea. The rather eccentric churchman has a great influence over young Philip, and soon the company is formed.

Of course Philip will have to make the first voyage himself. It turns out to be an adventure beyond his wildest dreams. He must first deal with Nazi agents determined to sabotage his project, and then with a wild Irish-American stowaway named Gloria. He and Gloria start off hating each other but over the course of several years their feelings have been dramatically transformed.

Yes, I did say several years. This simple Atlantic crossing becomes an epic voyage. Philip and Gloria find themselves hopelessly adrift and are carried wherever the current happens to take them. It first takes them to the desert shores of Africa, and then eventually to the Antarctic. In the Antarctic they discover evidence that one of Canon Beal-Brookman’s more eccentric ideas was in fact perfectly correct. The lost world of Atlantis did exist. And it still exists, in Antarctica.

At least, a lost world exists in Antarctica peopled by the descendants of the lost race of Atlantis. It’s a very strange and not very pleasant world, a world of high scientific achievement and human sacrifice, and the scientific discoveries of this civilisation include a means for controlling the weather.

Now what does all this have to do with World War II? You might well ask. In fact it has a great deal to do with World War II, and a young man who missed the war by being swept away on a raft will eventually play a very key role indeed in the outcome of that war. I won’t spoil things be revealing how this happens. It’s much more fun to let Wheatley slowly unravel his extraordinary plot.

And of course there’s sex. An essential ingredient in any Wheatley novel, and here provided by the high-spirited Gloria and her penchant for wandering about naked. Yes, this is vintage Wheatley.

Philip is perhaps not quite a typical Dennis Wheatley hero. He’s very brave but he is a man swept along by circumstances. He does not have the opportunity, until the very end, to show his mettle as a hero.

The pacing is rather slow in the first half of the book, but rest assured the plot does eventually pay off in a big way.

This is fantastic silly fun, utterly unbelievable but absolutely compelling in its sheer bravado and its extreme eccentricity. Wheatley believes it, and you will too. A fascinating and very unconventional lost world adventure. Highly recommended.
Posted by dfordoom at 12:53 AM