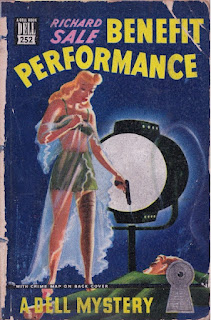 Richard Sale had a successful Hollywood career as a screenwriter and to a lesser extent as a director. He wrote several crime novels and not surprisingly used Hollywood as a setting. Benefit Performance, published in 1946, is a particularly good example.

Kerry Garth is a big-time movie star. His career is going just great until the day his publicist and Friend Casey Jones informs him that he is dead. Kerry Garth was murdered the night before.

How can this be? The answer is fairly simple. Kerry wanted a holiday very badly, and he particularly wanted to avoid attending the premiere of his latest movie. So he persuaded his stand-in, Joshua Barnes, to take his place at the premiere. Barnes has such an uncanny resemblance to Kerry that he had no problem convincing people that he really was Kerry Garth. And at the premiere someone shot Joshua Barnes dead.

As Casey Jones explains to the shocked star, the bullet that killed Barnes was obviously meant for Kerry Garth. Someone wants Kerry Garth dead, and when that someone discovers that he or she has killed the wrong man they’ll be coming after Kerry. Casey tells Kerry that he would be well advised to vanish for a while. When you’re a famous movie star disappearing is not that easy, but in this case it should be very easy indeed. All Kerry has to do is to pretend he is Joshua Barnes. Since Joshua Barnes had no difficult in passing for Kerry, Kerry should have equally little difficulty in passing for Barnes.

So far so good, but then Kerry Garth makes an unpleasant discovery. John Barnes was not exactly a nice guy. In fact he was such a swine that there are any number of people who would like to see him dead. Including a racketeer to whom Barnes owes ten grand. Kerry has taken on the identity of a man with many dangerous enemies.

He also discovers that Barnes was something of a ladies’ man. He’s been having affairs with many women, including one affair with a married woman that was likely to end in murder. To avoid being murdered Kerry has now put himself in a position where he seems very likely to become involved with a quite different murder. Or possibly several.

It’s a clever plot and Sale handles it with great skill. He really puts his hero through the mill as Kerry Garth’s impersonation of his stand-in almost becomes much too successful.

Sale gives us a colourful cast of supporting characters. Until quite close to the end there are numerous possibilities as the murderer of Joshua Barnes but none appears to be especially likely. This is not really a crime novel in which a detective plays a major role. Detective-Lieutenant Shane Harker will play his part but for the most part Kerry Garth is left to solve the mystery on his own. He certainly has a strong incentive to solve it since his life depends on it.

The Hollywood background is great fun and Sale clearly enjoys writing about that world. He shows us the glamour, and the emptiness and heartache that so often lurks beneath the surface.

A fast-paced and thoroughly enjoyable murder mystery, Highly recommended.
Posted by dfordoom at 5:17 AM