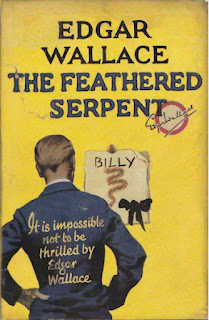 Edgar Wallace’s The Feathered Serpent is a typical Wallace thriller, and as far as I’m concerned there’s nothing wrong that. It has murder and it has secret societies and old grudges that demand to be settled.

A number of people receive threateningd cards emblazoned with the device of a feathered serpent, a device that we later find is associated with ancient Aztec religion and with a cult that still exists in Mexico and Central America. While they try to make light of it they are obviously deeply disturbed, and they just as obviously have some idea of the significance of the device. But they’re not telling.

Reporter Peter Dewin tends to be sceptical of the existence of secret societies but he can’t help being intrigued.

My Leicester Crewe, a mysterious financier, the origin of whose fortune is unknown, is one of the recipients. Another is publican Joe Farmer, while the popular actress Ella Creed also received one. There’s also Mr Crewe’s friend Paula Staines, who obviously knows what these cards mean as well.

During the course of his investigation Peter Dewin makes the acquaintance of Leicester Crewe’s private secretary, Miss Daphne Olroyd, and is clearly rather smitten with her. Miss Olroyd is anxious to change jobs and she takes a position with Mr Gregory Beale. Beale is a typical upper-class socialist with romantic notions about improving the lot of the poor. He’s a multi-millionaire and has given much of his fortune away to the poor although he’s still a very rich man. He lived along the poor under various assumed names, which probably helped to dispel his romanic ideas about them. He then retuned to his first love, the study of the ancient cultures of Central America. He has just returned to London after spending several years on archaeological digs there, with a load of Aztec and Mayan artifacts (including numerous statuettes of feathered serpents). In due course he will also receive one of the threatening cards.

Dewin will discover the existence of a large-scale forgery ring several years ago and suspects that it has something to do with the recent events. One of the criminals in this ring was William Lane, now deceased. Or is he deceased? Leister Crewe certainly hopes so. Dewin will pick up leads from several ex-convicts and will discover that the Feathered Serpent seems to be some sort of secret society flourishing in His Majesty’s prisons.

The Feathered Serpent case will eventually lead to murder and two kidnappings.

It’s the sort of thing that Edgar Wallace did supremely well. It hardly qualifies as believable but Wallace had a knack for spinning these outrageous yarns and making them seen plausible. He was also unfailingly entertaining. There are plenty of breathless thrills and a conspiracy that seems to deepen by the day. There are plenty of colourful characters nine of whom are quite what they appear to be.

Edgar Wallace (1875-1932) was an incredibly prolific and extremely popular author, writing no less than 175 novels. He was even more popular on the Continent than he was in Britain and his books have been adapted for so many movies that it’s almost impossible to keep count of them, but the number certainly exceeds 160.

The Feathered Serpent was originally published in 1932, not long before Wallace’s untimely death.

It’s all great fun and Wallace keeps the action moving along swiftly, as he always did. Wonderful entertainment and highly entertaining. If you haven’t discovered the joys of Wallace’s thrillers there is a good place to start. Highly recommended.
Posted by dfordoom at 10:00 PM