The Case of the Lame Canary 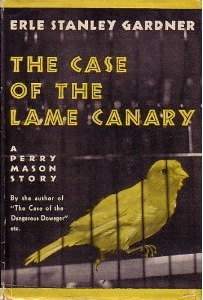 The Case of the Lame Canary is a relatively early Perry Mason mystery by Erle Stanley Gardner, published originally in 1937.

It starts with a woman carrying a canary in a cage offering Mason the kind of case he never accepts - a divorce case. But there is one thing that bothers Perry about this case - why is the canary lame in his right foot? It’s the sort of trifling detail that really gets under the skin of a good detective. Perry just has to find out the answer to this question, so he takes the case.

The woman who brought the canary to his office is not actually his client - it’s her sister he will be acting for. At first it seems to be a depressingly sordid tale of domestic intrigue, but that’s before the murder is discovered. There may or may not be a witness to the murder - a man who may or may not be suffering from traumatic amnesia who may or may not even remember what he saw. Nobody knows exactly what it was that this man did see, but everyone is sure it was important. Perhaps even as important as the lame canary.

Gardner’s gives us the sort of fiendishly twisted plot that devotees of golden age crime fiction dote on, and those devotees will not be disappointed.

The Perry Mason novels belong to that subclass of crime fiction in which the detective hero himself is as entertaining as the mysteries he unravels. Fans of the immensely popular 1950s Perry Mason television series will find that the Perry Mason of the books is a slightly more glamorous and distinctly less reputable figure than the television version. Not that Perry Mason would ever do anything that was actually crooked - he just enjoys upsetting the police and as he himself says his style in court is to throw legal monkey wrenches into the machinery of justice at every possible opportunity.

Erle Stanley Gardner (1889-1970) received virtually no formal legal training but taught himself law and passed the California bar examination in 1911. He divided his time between the practice of law and the writing of crime fiction for the pulp magazines until the early 1930s when the success of the early Perry Mason novels allowed him to devote himself full-time to writing.

The Case of the Lame Canary is classic golden age detective fiction and is highly recommended.
Posted by dfordoom at 11:35 PM