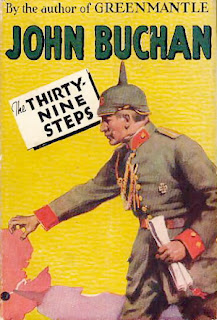 Buchan produced both fiction and non-fiction and wrote in a variety of genres including some excellent horror stories and even what could be described as a paranormal adventure novel (The Gap in the Curtain). Buchan was also a successful politician and ended his career as governor-General of Canada (as Lord Tweedsmuir).

But it is for the Richard Hannay novels that he is now best remembered.

The Thirty-Nine Steps is a classic chase story. South African Richard Hannay is bored by life in London but he is about to get more adventure than he’s bargained for when he meets the mysterious Scudder. Scudder is an intelligence agent and his story about the assassination of a Balkan political leader seems fantastic to Hannay. Then Scudder is killed by enemy agents and Hannay finds himself in possession of a secret that could cost him his life.

Being uncomfortable with city life at the best of times he decides he would have a better chance of survival in some wild place where his experiences on the veldt would stand him in good stead. So he heads off in the direction of the Scottish Highlands. He is on the run not only from the German spy network but also from the police, being a suspect in the murder of Scudder.

While evading capture Hannay also has to puzzle out the full meaning of the conspiracy uncovered by Scudder, and it goes far beyond anything he originally imagined. It is nothing less than a plan for destroying the British fleet on the outbreak of war. But what is the meaning of the thirty-nine steps that keep getting mentioned in Scudder’s notebooks? And how can Hannay, a mere civilian, convince the British government of the truth of this amazing story? He will need evidence. So while Hannay is the hunted he is about to turn hunter.

Hitchcock’s classic 1935 film version is the best-known of the several movie adaptations of this novel. The plot of the 1935 movie differs quite markedly from the plot of the book. In the book the thirty-nine steps is not a mere McGuffin as in the film (a McGuffin being something of no importance in itself except insofar as both the heroes and the villains happen to be seeking it). In the book the thirty-nine steps are crucially important and the espionage conspiracy takes centre stage (while the movie is essentially just a chase movie, albeit one of the greatest such movies ever made).

Richard Hannay is one of the great fictional spy heroes, a rather taciturn but very determined character who is driven by both patriotism and a thirst for adventure.

Buchan’s novel is a classic of the spy genre and is a must-read for any spy fan.
Posted by dfordoom at 1:01 AM