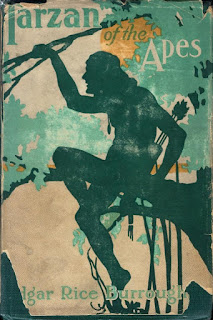 Tarzan remains Edgar Rice Burroughs' most famous creation. Apart from the huge sales of the many Tarzan novels the character appeared in numerous movies and television series. Like Sherlock Holmes Tarzan is an indelible part of our popular culture. People who’ve never read a Tarzan book know who Tarzan is.

Tarzan of the Apes, first published in book form in 1914, was the first of the series and is therefore crucial in not only introducing the character but in giving us the story of his birth and his childhood among the apes.

Lord Greystoke and his wife are marooned on the West African coast after a mutiny on the ship in which they were travelling. They do not survive for more than a year, but their newborn son (and heir to the title of Lord Greystoke) does survive after being adopted by an ape who has lost her own offspring. The young Lord Greystoke is named Tarzan by the apes.

The apes among whom Tarzan is raised are not gorillas. They are an imaginary species of ape, slightly higher on the evolutionary ladder than gorillas. They are a sort of missing link between mankind’s ape ancestors and modern humans, still basically animals but possibly possessing rudimentary language skills. Tarzan claims also to understand the language of elephants and other animals so the question as to whether the apes really possess a language as such is perhaps debatable.

Tarzan might not be as strong as an ape but he grows stronger than an ordinary man and this allied with his superior intelligence allows him to survive, and eventually to become the chief of the band of apes. He is now Tarzan, King of the Apes, a fearsome hunter and killer. Tarzan exults in his hunting prowess but he has vestiges of a human conscience and kills only to survive.

When the apes encounter hostile African tribesmen Tarzan proves to be equally successful as a hunter of men.

The hut in which his human parents lives until their deaths becomes a sort of shrine to Tarzan. Although he he is unaware of his human parentage he comes to suspect that he is not an ape but a man. From books in the hut he learns to read but not to speak English.

Then comes the day he encounters his own people again. The eccentric Professor Porter, accompanied by his daughter Jane and his colleague Philander, has also been shipwrecked after what seemed to be a crazy treasure hunt proved to be surprisingly successful. This encounter will eventually lead Tarzan to Paris and to the United States.

Tarzan will also discover love, with Jane Porter, but he has two rivals, one of whom provides an unexpected link to his past.

Burroughs was always fascinated by the ideas of lost worlds and of evolution going in unexpected directions and while these ideas are dealt with in a different way here compared to say the Peklucidar or Barsoom books, they’re still present. The ape society in which Tarzan spends his childhood and youth is typically Burroughsian.

This Tarzan is both more savage and, paradoxically, more civilised than the Tarzan of the movies. He’s truly a man caught between two cultures, and between the two sides of his own nature. Highly recommended.
Posted by dfordoom at 12:51 AM