Ghosts: being the experiences of Flaxman Low 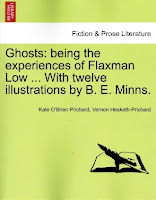 Ghosts: being the experiences of Flaxman Low includes all twelve adventures of ghost-hunter Flaxman Low. The stories were written between 1898 and 1899 by a mother-and-son writing team, Hesketh V. Prichard (1876-1922) and Kate O'Brien Prichard (1851-1935), under the pseudonyms E. and H. Heron.

Flaxman Low was the first of the great fictional psychic detectives. The stories are less well-known than William Hope Hodgson’s tales of Carnacki the ghost finder or Algernon Blackwood’s John Silence stories. I’m not really sure why.  They’re perhaps not quite as good but they’re still highly readable and very entertaining. They certainly don’t deserve the obscurity into which they’ve fallen.

One interesting thing about Flaxman Low is that like Sherlock Holmes he has a great nemesis, an evil criminal mastermind with whom he is obsessed. Flaxman Low’s Professor Moriarty is Dr Kalmarkane. Rather than being a master criminal Kalmarkane is something much more dangerous, an occult researcher who uses his powers for evil while Low uses his knowledge of the occult for good. Kalmarkane aims to gain unlimited power through the aid of diabolical allies and black magic.

The stories were obviously patterned on the Sherlock Holmes stories except that Flaxman Low is the brilliant amateur investigator you call in when you’re menaced by a ghost. It’s unfortunate the authors didn’t write more of these stories as they seemed in the later installments to be evolving more and more towards the pattern of the Sherlock Holmes stories with young Dr Gerald d’Irman playing the Dr Watson role and it would have been interesting to see where later stories might have gone.

Like the Carnacki the ghost finder stories you can’t always be sure that the strange events recounted will have a supernatural explanation. Mostly they do, but not always. When the explanations are non-supernatural they’re still delightfully bizarre.

Another distinctive feature of these stories is that they don’t always have clear-cut resolutions. Flaxman Low believes he has solved the puzzle but sometimes he’s not entirely sure. And the reader is not entirely sure either. It’s an interesting rather modern touch. Not everything can be explained with certainty.

I admit to being a big fan of the occult detective genre and if you share my enthusiasm for this style of story you’ll find this volume well worth the purchase price.
Posted by dfordoom at 10:40 PM