To the Devil - a Daughter, by Dennis Wheatley 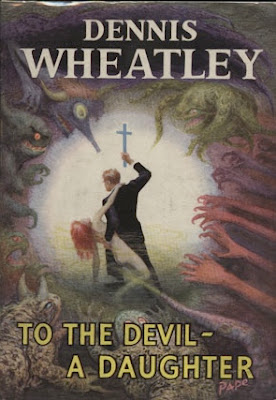 To the Devil - a Daughter, written in 1953, is everything you could ask for in a Dennis Wheatley novel. It has wicked devil-worshippers, outrageous conspiracies, and some amusingly lurid descriptions of satanic rituals.

A businessman makes a deal with a satanic clergymen, and has his daughter Christina baptised into Satan’s church. Twenty-one years later, provided she is still a virgin, she is destined to be the centrepiece of a hideous satanic ritual. As she has been dedicated to Lucifer she undergoes a personality change every evening when the sun goes down. In the hours of darkness she becomes a Bad Girl, giving herself up to all kinds of naughtiness.

Luckily she makes the acquaintance of Molly, a middle-aged English writer who used to work for British Intelligence during the war, and Molly and her son John are determined to save Christina from the clutches of the Satanists, and quite probably from a Fate Worse Than Death.

Wheatley also finds time for his favourite hobbyhorse, the links between Satanists and Communism. It’s all breathless excitement, and a silly but highly entertaining romp. The fact that Wheatley took this stuff seriously just makes it even more enjoyable.

This novel was of course the basis for the last horror movie made by Hammer Studios. The movie doesn’t follow the plot of the book very closely at all, but it’s also great fun in its own way.
Posted by dfordoom at 10:50 PM