Green for Danger, by Christianna Brand 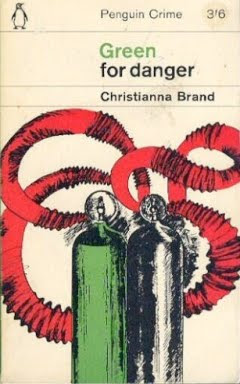 A military hospital in Kent during the Blitz is the unusual setting for Christianna Brand’s 1945 murder mystery Green for Danger. A patient dies under anaesthetic, and at first it seems unlikely to Inspector Cockrill to have been in any way a suspicious death. Then a second death occurs, and this time it’s clearly a case of murder. It soon become obvious that there are only six possible suspects, all of them doctors and nurses at the hospital.

To solve the murders Inspector Cockrill relies to a large extent on putting his six suspects under extreme pressure and waiting for one of them to crack, and also allowing the interactions between the suspects to gradually unravel the threads of the crime. The tension between the characters, each of then knowing that one of them is a killer, builds inexorably and almost unbearably. This also allows the author to really flesh out the characters – we get to know them extremely well, and we come to care about them. They’re not just suspects, they’re people, with all the everyday hopes and fear and jealousies and human weaknesses of normal people.

Green for Danger has the intricate plotting, and the plentiful red herrings, of a typical English Golden Age mystery novel, but with a psychological complexity not usually associated with that type of detective story. An engrossing, sometimes quite moving, and always highly entertaining book.
Posted by dfordoom at 5:31 AM