The Irish Witch by Dennis Wheatley 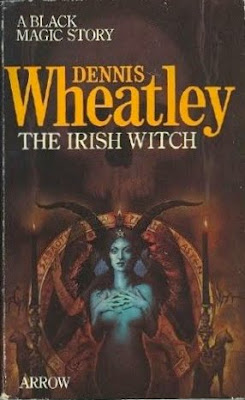 The Irish Witch was one of Dennis Wheatley’s later novels. Published in 1973, it allowed Wheatley to take advantage of the times to add a fair amount of sexual perversity to his tale. Not that there isn’t sexual perversity in his earlier books, but this time it’s much more pervasive.

Wheatley (1897-1977) is a surprising writer for those who only know him by reputation. He’s often described as reactionary and jingoistic but in fact he comes across in his books as an odd mixture of puritan and libertine, and his political view as expressed in his writing often hold surprises as well. He was certainly a conservative, but a complex one.

The Irish Witch also demonstrates his willingness to mix his genres. It’s a spy adventure thriller set during the Napoleonic Wars but with occult elements as well.

The infamous Hell Fire Club has been revived and is being used as a front for espionage activities on behalf of the French. One of the key figures behind the revived club is an Irish witch whose motives are a combination of Irish nationalism and greed. Roger Brooks is not yet aware of the club but his family are being drawn into its net.

Brooks is an English secret agent who has spent years undercover posing as an aide-de-camp for the Emperor Napoleon. He had been intending to retire from the spy business but circumstances conspire to throw him back into thick of it. Brooks has a new wife. He’s find of her, but not to the extent of being willing to give up his long-time mistress Georgina. Georgina is married to an elderly and ailing duke.

Georgina’s son Charles, Lord St Ermins, has long been in love with Brooks’ daughter Susan. But his devotion to Susan an his intention to marry her is not going to stop him from attending meetings of the Hell Fire Club. He’s not interested in the occult content of the meetings but he’s very interested in the orgies which invariably follow. He is soon to discover that one of the young women about to be initiated into the club is in fact Susan. And Susan and Charles are about to find themselves in the clutches of a whole bevy of Satanists, including the Irish witch herself, her daughter Jemima (who plans to marry Charles) and the lecherous Lady Luggala.

While this is going on Roger and his new bride find themselves stranded in the United States after the outbreak of the War of 1812, and will face a long and arduous trek northwards to reach the Canadian border. Luckily they make the acquaintance of a resourceful Algonquin brave named Leaping Squirrel who has been engaging in some espionage work himself. He’s about to be hanged by the Americans as a British spy but Roger does some fast talking and manages to engineer his escape.

These two sub-plots start to intersect when Georgina has a vision of her son, a prisoner of the French (he has volunteered to fight in Spain under the Duke of Wellington), about to be hanged. Knowing that her psychic powers are generally reliable. Roger has no choice but to return to the French Emperor’s service in order to procure Charles’ release.

These are just some of the complications of the plot. The problem Wheatley has in this book is that his story requires an extensive background knowledge of the Napoleonic Wars and the War of 1812 and in 1973 he could not assume his readers would have that knowledge. So there are huge info dumps which interrupt the flow of the narrative. While it’s a clumsy manner of dealing with the problem it has to be admitted that the background information he provides is fascinating.

The sympathetic portrayal of both Leaping Squirrel and his father, and in fact of their whole tribe, is one of those surprising elements I mentioned earlier (especially coming from someone of his generation with a reputation for jingoism).

Wheatley’s view of witchcraft is much less sympathetic. On the other hand, despite his customary disclaimer at the beginning of the book assuring the reader that he has never personally been involved with the occult, it’s clear that Wheatley has an extensive knowledge of and enthusiasm for his subject matter.

Wheatley’s books are highly entertaining trash of a kind that you just don’t get any more. There’s been a calamitous decline in the quality of literary trash over the past 30 years or so.
Posted by dfordoom at 3:26 AM