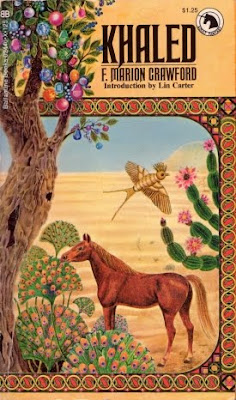 Considering the extent of the 19th century obsession with The Mysterious East and the enormous vogue for orientalist art it’s perhaps surprising that there weren’t more novels using Arabian Nights-style settings. There was of course William Beckford’s Vathek, and there was also F. Marion Crawford’s Khaled: A Tale of Arabia.

Apart from a couple of much-anthologised short stories (notably For the Blood is the Life The works of the amazingly prolific American writer F. Marion Crawford (1854-1909) are very unjustly neglected. His gothic novel The Witch of Prague is well worth seeking out.

Khaled, published in 1891, is a story of the fantastic and a love story. The princess Zegowah has many suitors but the only one she has seriously considered marrying is an Indian prince. He is unfortunately an unbeliever but Zehowah is led to believe that he will convert to the true faith if she consents to be his wife. The genie (or djinn or whichever other alternative spelling you prefer) Khaled knows that the Indian prince intends to deceive Zehowah and in a fit of anger he slays the prince.

Had the prince been one of the faithful Khaled would have faced instant destruction for his action but since the man he killed was a hypocite and an unbeliever Allah offers Khaled a chance. He will turn Khaled into a man, but without a soul (djinns do not have souls). If Khaled can win the love of Zehowah he will gain a soul and will have the same chance as any mortal of entering Paradise at the Last Judgment. If he fails to win her love then he will face oblivion when he dies.

Winning Zehowah’s love turns out to be quite a challenge. She has never experienced love and he knows little of women. He tries to achieve his objective by performing heroic deeds. He wins a kingdom, but winning the love of a woman is not so easy. Zehowah is determined to be a good wife but she believes herself to be incapable of feeling love. Khaled finds he has much to learn about women, and also much to learn about what it means to be a human being. And he must himself learn what love really means.

It’s an engaging tale of intrigue and adventure as well as being a great love story. Highly recommended.
Posted by dfordoom at 12:17 AM