Raffles, A Thief in the Night, by E. W. Hornung 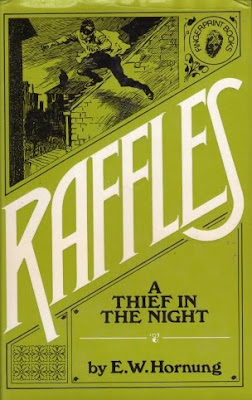 Raffles, A Thief in the Night, published in 1905, was E. W. Hornung’s third and final collection of stories about A. J. Raffles, celebrated cricketer and gentleman-burglar.

These stories are unusual among English crime stories in having a criminal as the hero. And Raffles is no Robin Hood. He is most definitely a criminal. He’s also an attractive and likeable character, and he does have his own moral standards. He does his best to avoid causing physical harm to the victims of his crimes, and at least some of his escapades are motivated more by the challenge involved in a difficult burglary, or by whimsical motives of his own, than by an actual desire to steal the items in question. On occasion he will steal something, and then promptly return it to its owner. In most cases, though, he is a thief pure and simple.

Aided by his erstwhile school pal Bunny Manders he becomes the most notorious jewel thief in England.

The stories are as much about the friendship between Bunny Manders (who narrates the tales) and Raffles as they are about their life of crime. There’s perhaps just the slightest hint of a homoerotic element to this friendship, although it’s possible that the author wasn’t even consciously aware of it. It certainly seems to be the only significant relationship in both their lives.

Raffles is a rich and complex personality, a man whose motivations for choosing crime as a career are most likely more to do with his own personality than with actual, necessity.

The obvious comparison is with Maurice Leblanc’s Arsene Lupin stories, but Raffles is the more interesting character. Hornung was the brother-in-law of Sir Arthur Conan Doyle, who disapproved of the Raffles stories because they glorified crime! Conan Doyle may not have approved of them, but I highly recommend them.

Incidentally, there was a TV series based on these tales back in the late 70s, with Anthony Valentine (always a wonderful actor) as Raffles.
Posted by dfordoom at 4:15 AM