Once is not Enough, by Jacqueline Susann 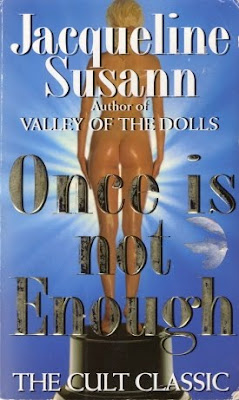 I’ve always loved trash cinema but in the past year I’ve discovered that trash fiction holds just as many delights. And fiction doesn’t get much trashier than Jacqueline Susann. Once is not Enough, published in 1973, was the third of her blockbuster bestsellers.

While it didn’t quite equal the success of Valley of the Dolls (which has sold around 30 million copies and has been claimed to be the biggest selling novel of all time) it did reach Number 1 on the New York Times bestseller list. Susann didn’t quite invent the literary blockbuster, but she did take the blockbuster formula to new heights. Her critics would have said she took it to new depths, but when you can sell 30 million copies of one novel you can afford not to worry too much about the critics.

Once is not Enough includes the basic ingredients that had made Valley of the Dolls so successful - a show business background, glamour, celebrities, sex, drugs, tragedy and self-destructiveness. And it adds a very large helping of kinkiness.

The heroine this time is January Wayne, the daughter of a big-time Broadway producer who had tried to repeat his success in Hollywood and come badly unstuck. January is fond of her father. Very fond of him. Very very fond of him. And not in the way 20-year-old women are supposed to be fond of their dads. He’s the only man she really wants, but she tries desperately to find someone else as similar to him as possible. And ends up with a 58-year-old alcoholic author who has grown tired of writing books that are admired by the critics but don’t sell and has decided to try his hand at writing bestsellers.

Every element that could possibly have outraged mainstream literary critics and self-appointed moral guardians of society makes an appearance at some stage in the outlandish soap-opera plot. Susann’s great strength as a writer is that she had absolutely no shame and was completely untroubled by irrelevant concerns such as good taste. She believed in excess, and that excess works best if you have a very large amount of it. Truckloads of it.

Part of the success of Valley of the Dolls was due to the fact that Susann knew the world depicted in the novel extremely well, having been an actress on Broadway in the 50s. With Once is not Enough she moves into a 1970s setting, and she was not quite as familiar with the world of early 70s youth culture. But it doesn’t really matter since her occasional misunderstandings of this world just add to the book’s already enormous camp appeal.

The novel is of course complete trash, but it celebrates its own trashiness. Susann’s great insight into the literary world was that if you’re going to write trash, do it with style and energy and don’t apologise for it. Revel in it. She pushes trashiness so far that it becomes an art form. And like so much trash art, it ends up reflecting more of the truth about the society that produced it than the tedious tomes churned out by Serious Writers who write Literature.

Susann’s novels are also, as Camille Paglia has so rightly pointed out, absolutely essential reading for anyone who wants to understand American popular culture today. Susann was one of the people who created modern popular culture. And her books are fun.
Posted by dfordoom at 2:33 AM