The Mystery of the Yellow Room, by Gaston Leroux 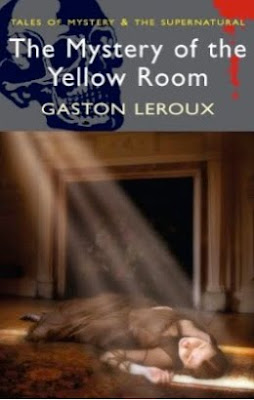 Gaston Leroux is of course best known as the author of Phantom of the Opera but he was actually quite prolific. He write quite a few mysteries, the most famous being The Mystery of the Yellow Room.

This is the book that introduces his detective Rouletabille, and an interesting sleuth he is too. He is in fact a newspaper reporter rather than a detective as such but as a crime-solver he is second to none. The most interesting thing about him though is that he is just 18 years old. He’s a boy genius detective. Being so young his biggest problem is natural persuading people to take him seriously. He’s also very much a teenager, with the arrogance and impetuosity of youth, and inclined on occasion to the kinds of errors of judgment you’d expect from someone with limited experience of life.

In spite of these minor weaknesses he is the foremost detective of his era, and already has some extraordinary successes behind him.

The plot involves the attempted murder of a scientist’s daughter. Mademoiselle Stangerson has spent her entire adult life acting as her father’s assistant and at 35 remains unmarried. For years a fellow scientist has been paying court to her, but although she is fond of M Darzac she steadfastly refuses to marry him.

Professor Stangerson and his daughter have been working in a fairly esoteric field of science, researching the dissolution of matter. There seems no obvious motive for the vicious assault upon her, an assault that leaves her close to death. Even more puzzling is the fact that her room, next door to their laboratory, is locked from the inside when her father and the servants finally break down the door after hearing sounds of a struggle and gunshots.

This is an early example of the locked-room sub-genre, in which a crime is committed that appears to be impossible but nevertheless it has occurred. Edgar Allan Poe a the inventor of this sub-genre with his story The Murders in the Rue Morgue and Conan Doyle had also tried his hand at it with The Speckled Band. The potential problem with this type of mystery is that the solution to the crime often tends to be even more contrived than the usual run of detective stories.

The Mystery of the Yellow Room goes perilously close to being just a little bit too clever for its own good. On the other hand it’s certainly ingenious and it’s lively and entertaining and on the whole it succeeds pretty well. Making allowances for the fact that fictional crimes are always much more convoluted than real-life crimes it has to be admitted that Leroux has come up with a plot of genuine originality and interest.

The book was very highly regarded in its day and it’s easy to see why Leroux was so popular. It’s definitely worth picking up, and the Wordsworth paperback edition is appealingly inexpensive as well. It’s also a reminder of the very significant contribution that French authors made to the development of the crime novel.
Posted by dfordoom at 3:06 AM