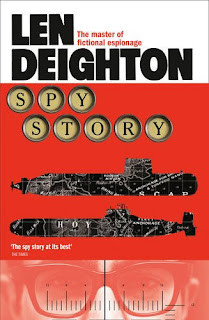 Spy Story is a 1974 spy thriller by Len Deighton. The first-person narrator is Patrick Armstrong, a man who works at the Studies Centre in London. Patrick and Ferdy Foxwell have just returned from one of their cruises, on a British nuclear submarine collecting intelligence on the activities of the Soviet Navy. The Studies Centre then uses this data to play war-games. The sort of ultra-sophisticated war-games using computer assistance that both the western and Eastern bloc militaries would play to figure out how to destroy each other in the event of all-out war. The Studies Centre is a kind of quasi-official offshoot of the intelligence community. Which makes Patrick Armstrong not quite an intelligence officer but kind of vaguely in that sort of field.

The first question that is going to occur to any Len Deighton fan reading this book is - is Patrick Armstrong actually the unnamed spy of Deighton’s first five spy novels (the unnamed spy who became Harry Palmer in the film adaptations)? Deighton has stated that he isn’t but he has done so in terms that actually suggest very strongly that he might very well be the same man. In fact the internal evidence of the novel pretty strongly suggests that he is the unnamed spy, a few years older and now retired from the Secret Service. One thing we know for certain about him is that his name is definitely not Patrick Armstrong, and that he definitely was a spy, working for the very same branch of the Secret Service that the unnamed spy worked for. And his former boss was Dawlish, the unnamed spy’s boss. We also know that he has no intention of going back to being a spy, and given that the unnamed spy was not exactly enthusiastic about being a spy that also seems consistent with his being the same man.

Patrick Armstrong has stumbled upon something rather interesting. His old flat is full of the same photos that were always there, photos of himself with various other people. The photos are exactly the same, but his face has been replaced by someone else’s.

Other disquieting things happen. Like having his home raided by Russian security personnel (not what you expect to happen in London) led by none other than his old adversary Colonel Stok. There’s also an accident that might or might not be an attempt on the life of a British MP. And a witness to the accident whose story doesn’t add up at all.

The very last thing that Patrick Armstrong wants is to be drawn back into the murky world of espionage and counter-espionage but he has the uncomfortable feeling that that is exactly what might happen to him if he’s not careful.

It ends up with Pat and Ferdy and Colonel Schlegel on a US nuclear submarine making its way under the Arctic ice, a dangerous undertaking at the best of times but much more dangerous this time because the submarine is just a counter in someone’s strategic war game and it’s an expendable counter. It’s on an insanely dangerous course which would not in normal circumstances even be contemplated. The sea is too shallow, the ice above is too thick, the margin for error is non-existent. And to make things even more delightfully suicidal, there are those East German submarines. Plus the entire Russian Northern Fleet. All of which is guaranteed to produce some suitably nail-biting excitement.

This is typical Deighton in its extreme cynicism. It’s not just that both sides are equally cold-blooded and ruthless. There are multiple players in this game and some of them are crazy. Maybe all of them are crazy. There’s also Deighton’s trademark sardonic wit.

Spy Story is perhaps not quite top-tier Deighton but it’s still fairly entertaining. Recommended.
Posted by dfordoom at 4:35 PM