Will N. Harben's The Land of the Changing Sun 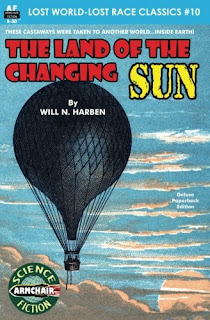 The Land of the Changing Sun is a lost world science fiction novel originally published in 1894.

The author, William N. Harben (1858-1919), was an American whose literary output was rather varied. It included science fiction, religious tales, detective stories, rural comedic sketches and what might be termed early social problem novels.

The Land of the Changing Sun is the tale of two adventurers, an American named Johnston and an Englishman named Thorndyke, whose balloon is lost somewhere over the Atlantic. They are fortunate to reach an island, but this island is so small and so remote that their long-term prospects seem grim. Then they are rescued, but in a very surprising way. They are taken aboard a highly advanced submarine of mysterious origins. It takes them to the land of Alpha, which they will soon discover is located deep beneath the Earth. Alpha has its own sun, which changes colours throughout the day (hence the book’s title) and has a wholly unique climate which never changes at all.

The kingdom of Alpha is very advanced technologically. Socially it’s a little disturbing. It’s too perfect. The Alphans practise eugenics in a rather ruthless manner. Everyone is physically perfect. The men are tall and athletic, the women are stunningly beautiful.

Of course now that our heroes are in Alpha the question is whether they will ever be allowed to leave. The king seems welcoming but the Alphans do insist on physical perfection. Will our heroes be able to measure up to such exacting standards and if not will they still be welcome?

There’s no doubting the physical perfection of the king’s daughter and so it’s hardly surprising that Thorndyke seems inclined to fall for her.

Like Jules Verne Harben takes technologies which existed at the time and extrapolates from them. Submarines existed in 1894 but they were still crude experimental types. Electricity was is use so Harben assumes that it will be used for just about everything in the future. Evolution was still big news and social Darwinism was gaining a following, and eugenics was becoming a matter of debate. The telegraph and telephone were making long-distance communication practicable so Harben in his novel assumes that it will be possible to transmit images over long distances. Motion pictures were not yet a practical proposition but in 1894 experiments were already being made, and motion pictures of a sort exist in Alpha. Airships already existed and the idea of heavier-than-air flight was attracting interest so the sophisticated flying machines in the novel would have seemed vaguely plausible.

The land of Alpha itself is inhabited by and was created by humans who left the world on the surface several centuries earlier. It is an artificial world. It is in fact a new Creation, the work of men who saw themselves as perhaps the equal of God. It is significant that Alpha is a world without religion. It is a materialistic technological society run along utilitarian lines. The greatest good of the greatest number, that sort of thing. There is nothing deliberately cruel about the Alphans (cruelty would be irrational and unscientific), it’s just that sometimes in order to ensure the greatest good of the greatest number sacrifices have to be made.

Harben’s intention is clearly to take a somewhat acerbic look at the logical consequences of materialism and utilitarianism, and he does so from what is clearly a Christian perspective.

The strength of the book is the ingenuousness of the author’s technological extrapolations. The changing sun itself is a fine example. I won’t explain the details - it’s better to discover them as Thorndyke and Johnston discover them. Harben is also quite good on the social implications of technology - the king is essentially a decent and dedicated man but the technology at his disposal does give him a degree of social control over his subjects and there are hints that maybe this is not entirely a good thing.

This is not exactly a dystopian novel. The Alphans are pleasant and generally happy and their king genuinely desires their welfare. It’s more of a flawed utopia. Science can create a potentially perfect society but do we really want to live in a perfect society? And this perfection comes at a price.

Don’t expect much in the way of characterisation. Thorndyke and Johnston as personalities are utterly conventional heroes, the most interesting thing about them being that they’re a bit more ineffectual than most late Victorian or Edwardian heroes. The princess is your stock standard princess, beautiful and noble. The king is perhaps marginally more interesting as he grows to doubt his ability to keep everything under control.

There is adventure here. There are no battles or fistfights or gun duels. The battles are against nature, and to some extent against nature modified by human actions. But there is excitement at the climax.

The Land of the Changing Sun is by no means in the top rank of lost world stories but it is an interesting one with a genuinely interesting artificial world. Worth a look for lost world fans.
Posted by dfordoom at 10:56 PM