Leigh Brackett’s People of the Talisman 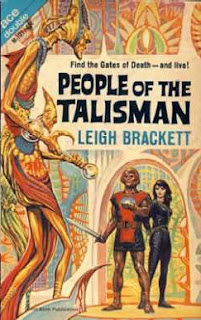 Leigh Brackett’s novel People of the Talisman was published in 1964. It is an expanded and revised version of her earlier story Black Amazon of Mars (which had appeared in Planet Stories in March 1951). It has been suggested that Brackett’s husband Edmond Hamilton may have been partly or even largely responsible for the expanded version.

It is one of many of Brackett’s stories recounting the adventures of Eric John Stark, an orphan boy raised on Mercury and now a planetary adventurer.

Leigh Brackett (1915-1978) was one of the finest exponents of the sword-and-planet genre, combining high adventure with a moody atmosphere of lost and dying civilisations.

Stark is in the northern wastes of Mars, the Norlands, and his friend Camar is dying. Camar wished to return to the city of his birth, Kushat, to die but he is never going to see the city. Before dying he gives Stark the famous talisman of Kushat, which he had stolen. The legend is that Kushat will never fall as long as it has the talisman. The talisman unlocks a great power from behind the pass known as the Gates of Death but no-one seems to remember any longer exactly what that power is.

But whatever it is Kushat will need it. The barbarian hordes of Ciaran are on their way to destroy Kushat.

It’s not that Eric John Stark owes anything to the people of Kushat. But Camar was his friend, he made a promise and being a half-barbarian he keeps his promises. Whether Kushat can be saved is other matter. The city is rich but has grown soft and self-satisfied. The talisman seems to be the only hope but that means passing through the Gates of Death and no-one has done that and lived to tell the tale.

What he finds on the other side of the Gates of Death is not at all what he expected to find. For civilisations, as for people, there are truly fates worse than death. And he has to reckon with a beautiful woman who is as much a barbarian as he is himself. And she is every bit as dangerous.

For most of the story there is no trace whatever of advanced technology. The technology of both Kushat and its enemies is essentially medieval. Technology will however play a significant part as the story moves to its conclusion. This is science fiction even if at first it  doesn’t seem to be.

Brackett’s Mars is a planet with a glorious history but the glory is long gone. The dreams remain. And dreams can be far more seductive than reality. The civilisations described in People of the Talisman live on their dreams.

There’s plenty of action and excitement in this short novel but Brackett always had more to offer than action. She offers both atmosphere and ideas, and there’s a certain literary polish that you don’t always get in sword-and-planet tales. While nobody writing in this genre could escape the influence of Edgar Rice Burroughs Brackett’s stories have more in common with the work of the other great female writer in this genre, Catherine L. Moore (especially her Northwest Smith stories).

People of the Talisman is highly recommended.

I’m told that Brackett’s original story Black Amazon of Mars differs significantly from the novel. Here's my review of the short story.
Posted by dfordoom at 4:16 AM