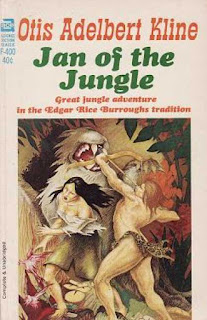 Otis Adelbert Kline (1891–1946) was an American pulp writer in the mould of Edgar Rice Burroughs. In fact he is sometimes dismissed as a mere imitator of Burroughs. Whatever sub-genres Burroughs worked in (or often invented) you could be pretty sure that Kline would soon be working in as well. Like Burroughs he wrote sword-and-planet adventures set on Mars and Venus, he wrote lost world stories and he wrote jungle adventure stories. An imitator he may have been, but at the time he was considered to be possibly Burroughs’ most serious rival in those genres.

Jan of the Jungle, published in 1931, is a jungle adventure tale about a boy raised by chimpanzees, which certainly does sound remarkably close to Burroughs’ most famous creation, Tarzan.

Jan is the son of a millionaire. For complicated reasons he is kidnapped as a baby by the evil mad scientist Dr Bracken and raised by a female chimpanzee. He can understand the primitive language of chimpanzees but he has no knowledge of any human languages. Since the book takes place in South America you may be about to object that there are no chimpanzees in South America but Kline has that objection neatly covered.

He escapes and has various adventures in the jungles of South America, with Dr Bracken pursuing him remorselessly. He also meet Ramona and falls in love with her. We will later discover that her personal history is as strange as Jan’s.

So far it sounds like an exact Tarzan clone but things are about to change. Jan chances upon the entrance to an underground river which takes him to a hidden valley. Jan of the Jungle is about to become a lost world tale.

At this point Kline decides to abandon any pretence at plausibility. The hidden valley contains not only a Mesoamerican lost civilisation but a huge variety of extinct animals, ranging from species extinct for thousands of years (such as sabre-toothed cats) to those that have been extinct for tens of millions of years (such as the stegasaurus). No explanation is offered for the survival of either the lost civilisation or the extinct animals. Not that it matters - if one demanded strict plausibility of lost world takes one would end with no more than a tiny handful to choose from.

There are two main sub-plots, the Jan sub-plot which concerns his parentage and Dr Bracken’s many attempts to recapture him, and the Ramona sub-plot which concerns her parentage and an attempt to kidnap her. Kline also at least pays lip service to the “boy caught between two worlds” theme but with an added twist since Jan is caught between three worlds - the modern world, the world of the jungle and the world of the hidden valley. To Jan it seems like the latter two are more likely to bring him contentment but then there’s the question of Ramona.

Dr Bracken is obviously a serious villain but in the hidden valley Jan will find another equally dangerous and treacherous enemy.

The important thing is that there’s enough here to satisfy the tastes of both jungle adventure and lost world fans and if you’re a straightforward fan of action and adventure you’ll find both those commodities in generous quantities.

Now if this had been an Edgar Rice Burroughs story there would have been a lot more attention paid to making the lost world more complex and more interesting and to explaining how it actually works. It would have been a much more fully developed lost world. Kline however has no such ambitions. He’s content to write an exciting pulp adventure yarn.

In other words there’s a reason Edgar Rice Burroughs is still a household name and Otis Adalbert Kline isn’t.

That’s not to say that there’s anything wrong with Jan of the Jungle. As long as you accept its pulp limitations it’s enjoyable. If you’re a Tarzan fan and you’ve read all the Tarzan stories or if you’re a lost world buff like me you’ll want to check this one out. Not great but still fun.
Posted by dfordoom at 10:21 PM