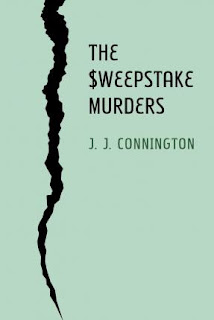 The Sweepstake Murders is a 1931 Sir Clinton Driffield mystery by J.J. Connington. Connington was a pseudonym of Scottish scientist Alfred Walter Stewart (1880-1947).

This is a tontine mystery, but it’s a tontine mystery with a twist because it doesn’t start out as a formal tontine. A tontine of course is an arrangement in which a group of people combine to invest in something and the entire proceeds go to the last surviving member, or to those still surviving by a certain date. It’s obviously a perfect setup for a murder mystery.

In this case Squire Wendover, in the course of an evening’s play at bridge, gets roped into joining a syndicate which is to buy nine sweepstakes tickets. In the unlikely event that they win a prize the winnings will be equally shared between the nine members of the syndicate. Two very unlikely events now transpire. Firstly the syndicate wins a great deal of money. And secondly, one of the nine dies before the prize can be collected. There was no specific clause in the agreement to cover such an eventuality. Now there are likely to be legal difficulties with the heirs of the deceased syndicate member. At this point it seems wise to convert the informal agreement into a more or less official tontine. You can file that decision under ideas that seemed like a good idea at the time.

To paraphrase slightly a memorable remark made by M to James Bond, to lose one member of a syndicate might be an accident, to lose two might be a coincidence, but to lose three has to be enemy action. And after the third death Inspector Severn knows he’s dealing with murder. Every single shred of evidence points unequivocally to all three deaths having been accidental but the inspector still knows it’s murder.

The tontine setup also has the advantage of limiting the circle of suspects without limiting them to a single location as in the classic country house murder. And Connington comes up with a fine murder setting in Hell’s Gape, a rather frightening geological curiosity.

Dead men tell no tales, but a dead man’s camera can tell some very interesting tales indeed. And it can tell a tale in intricate detail, if only you know how to extract the information. The photographic evidence is one of the highlights of The Sweepstake Murders. This is not a spoiler - it’s blindingly obvious that the photographic evidence is going to absolutely crucial but while Connington makes no attempt to hide this (in fact he draws attention to it in the most extravagant way) he still manages to keep us guessing as to exactly what it is that is lying there in those photographs waiting to be noticed.

While Sir Clinton Driffield plays an important role in this story for most of the book it’s really Inspector Severn’s case. And Severn approaches the matter in a way that would warm the heart of Freeman Wills Crofts’ Inspector French. Severn has very few clues to work with but he has an extraordinarily ability to squeeze every single drop of information out of those clues. In fact he’ll keep returning to the same clue and find that he can give it one more squeeze. If Connington belongs to what critic Julian Symons scornfully described as the Humdrum School of Detective Fiction then The Sweepstakes Murders is hardcore humdrum. If a case can be solved by dogged perseverance in routine police work then Severn can feel confident of success. A successful detective is one who will persevere to the bitter end, knowing that the truth is there somewhere among all the inconsequential details, buried like a needle in a haystack. Going through the entire haystack may be a daunting task but if it has to be done then it has to be done.

Sadly for Inspector Severn all his painstaking work isn’t enough. Sir Clinton Driffield certainly understands the vital importance of the routine legwork but he also has the ability to look at the jigsaw puzzle that has been so painstakingly pieced together and see the pieces that just don’t quite fit, the pieces that seem to be superfluous and the ones that seem to be missing. Often very very small pieces but they all matter.

The solution is dazzlingly complex. There were other writers who possessed the same degree of mastery when it comes to plotting but I don’t think there were any who could actually surpass Connington when he was at the top of his form. The Sweepstake Murders is a bravura performance. Very highly recommended.
Posted by dfordoom at 6:21 AM