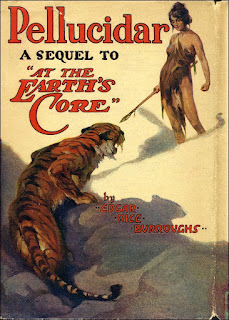 Edgar Rice Burroughs created a number of extraordinarily well thought out imaginary worlds, of which Pellucidar was one of the most interesting. The Pellucidar cycle began with At the Earth’s Core in 1914. The first of the sequels, Pellucidar, followed in 1915. It was published as a four-part serial in All-Story Weekly. It appeared in book form in 1923.

The adventures of David Innes beneath the surface of the Earth seemed to have come to an end at the conclusion of At the Earth’s Core but Innes still has a lot of unfinished business in Pellucidar. Most of all he has to find Dian the Beautiful again.

Pellucidar is not just a world beneath the Earth. It’s an inside out world. The surface of Pellucidar is the inner surface of the hollow Earth. It has its own sun, right at the centre of the Earth. There is of course no horizon since this world’s surface curves upwards.

And, curiously enough, there is no time in Pellucidar. Which is to say that while time obviously passes there as it does elsewhere there is no means of measuring the passage of time. There is no night, just endless eternal day.

Pellucidar is a Stone Age world. There are several intelligent species. The most advanced are the Mahar, winged reptiles who communicate entirely by telepathy, and even they are fairly primitive technologically. The humans of Pellucidar are firmly mired in the Stone Age. There are also several species of both ape-like men and man-like apes.

In At the Earth’s Core David Innes had managed to unite a number of human tribes to establish the Empire of Pellucidar, with himself as emperor. On his return he finds that his empire has collapsed. And his empress, Dian the Beautiful, has disappeared. He does manage to find his old friend Abner Perry and with his help he intends to regain his empress and rebuild his empire.

This book is certainly not lacking in action. There are the narrow escapes from certain death that you expect in any adventure tale but there are also full-scale sea battles. Innes encounters some old enemies and acquires some surprising new allies.

Innes is a pretty standard adventure hero. He’s brave and resourceful and determined and extremely noble. Abner Perry is more interesting. He’s basically a coward but he’s still an extremely useful sidekick and in his own way he’s stubborn and determined.

The various intelligent species of Pellucidar are all quite distinctive with the Mahar being particularly interesting. They’re an odd mixture of cruelty and honour.

This is pure pulp fiction in style but it’s definitely exciting.

Burroughs had a particular gift for world-building. And over the course of his career he created a whole series of fascinatingly different imaginary worlds.

Pellucidar is in some ways very much like prehistoric version of Earth, complete with species extinct on the surface of the Earth for millions of years. In other ways it’s a seriously strange and alien world and Burroughs makes good use of some of its subtly strange qualities. In a world in which there are no stars and the sun is always directly overhead finding your way about can be challenging. If you sail out of sight of land you have no means of navigation whatsoever. You are simply lost, as happens to our hero at one point. The impossibility of measuring time also plays its part in the plot.

Burroughs was one of the masters of pulp adventure fiction and Pellucidar is fine entertainment. Highly recommended.
Posted by dfordoom at 4:50 AM