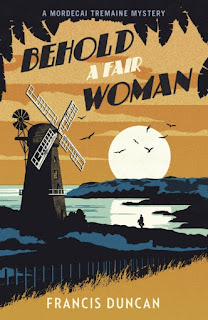 William Underhill (1918-1988) was an Englishman who wrote quite a bit of detective fiction, including the five Mordecai Tremaine mysteries published between 1947 and 1954 under the pseudonym Francis Duncan. These five books have been reissued in handsome paperback editions by Vintage Books. The last of them was Behold a Fair Woman.

Behold a Fair Woman takes place in the Channel Islands. Amateur detective Mordecai Tremaine is staying with some friends on one of the islands and he’s hoping that his restful holiday is not going to be interrupted by any murders (like most amateur detectives he finds that murder has a way of following him around). Initially it all seems rather idyllic. He meets some interesting acquaintances. For quite a while nothing much happens, except that there are a few small things that make Mordecai Tremaine slightly uneasy. Odd quirks of behaviour on the part of a number of people, and the relationships between various people also seem slightly wrong.

Finally murder is committed. The murderer could have been one of the half a dozen people staying at the Rohane Hotel, or one of several others associated with those people.

The Chief Officer of the island (more or less equivalent to a Chief Constable) is happy to have the assistance of the famous Mordecai Tremaine. There’s an obvious suspect, but maybe just a bit too obvious. There are plenty of other suspects and it’s fairly clear that none of them are being particularly truthful. All of them seem frightened, or anxious. It builds to a violent climax with unexpected results.

There’s plenty here to like. The setting is good although I couldn’t help thinking that the author didn’t really take full advantage of it. Mordecai Tremaine is a likeable detective. He’s a man of somewhat advanced years and apart from criminology he has another unusual hobby - he is passionately fond of romance stories. He’s a nice old fellow who likes nothing better than to see young people find true love.

Perhaps not surprisingly given Tremaine’s interest in human relationships, it’s the relationships between the characters that are the key to the mystery and those relationships are complex and are handled reasonably well.

There are however some weaknesses to this novel. Some of the clues are too obvious. They don’t necessarily reveal too much about the identity of the murderer but they do reveal too much too soon about the background to the murder. More serious is the fact that the detective overlooks some blindingly obvious clues. Apart from being unconvincing this also shook my faith in Mordecai Tremaine a little. I also got the feeling that this wasn’t a matter of deliberately making the detective prone to human weakness but simply a structural fault in the plot. A more skilled writer might have avoided such plotting weaknesses.

There’s also the fact that the crucial discovery in the case is made by accident but it feels contrived. It relies on a character just happening to do something unexpected because the plot requires him to do so.

Mordecai Tremaine doesn’t really do all that much in the way of detecting. Mostly he just stumbles upon things. There’s way too much reliance on overheard conversations, with Tremaine just happening to be in the right spot at the right time so he can overhear things without being seen.

If you’re drawn to golden age detective fiction because you love impossible crimes, locked-room mysteries or unbreakable alibis you might be a bit disappointed by this one. The plot is quite good but what it lacks is the remorseless unravelling of the puzzle by an astute detective with a genius for spotting the significance of vital clues. Tremaine is a rather passive detective who goes for lots of walks whilst waiting for the murderer to make a mistake - he’s not a detective who makes things happen.

By the standards of 1954 this is a fairly old-fashioned book (which to me is a good thing). It adheres to the conventions of the golden age murder mystery. It just doesn’t quite demonstrate the sheer joy in the solving of intricate puzzles that you get in the works of the great masters of the golden age. The puzzle is intricate enough but it’s largely allowed to just work itself out. Mordecai Tremaine’s contribution is mostly limited to explaining the puzzle at the end rather than actively solving it.

On the whole I’m afraid I was somewhat underwhelmed by this book.
Posted by dfordoom at 6:09 AM