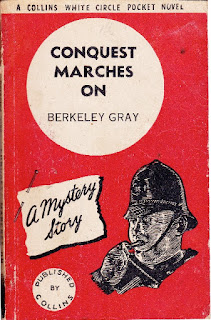 Conquest Marches On, published in 1939, was the fourth of Berkeley Gray’s Norman Conquest thrillers. Gray was actually the incredibly prolific Edwy Searles Brooks (1889-1965) who had already been churning out potboilers for a couple of decades before creating Norman Conquest. His earlier output comprised mostly short stories including quite a few entries in popular series such as the Sexton Blake series.

Norman Conquest is very much a Simon Templar clone. In fact he’s almost a direct copy. He’s a handsome young adventurer who doesn’t mind relieving villains of their ill-gotten gains but he’s always prepared to fight for the rights of ordinary people victimised by criminals. He’s a virtuous hero, but one prepared to bend the law a little, or even quite a lot. He’s Robin Hood with a dash of the buccaneer about him. He loves adventure for the sake of adventure. He loves cracking whimsical jokes. It’s the formula used with such success by Leslie Charteris in his Saint stories. It’s not just a variation on the formula. It’s the identical formula.

It has to be said that the Norman Conquest books are not in the same league as Charteris’s Saint stories. Charteris had the lightness of touch and the sense of style to make the formula work with every appearance of effortless ease. The Norman Conquest books by contrast seem a little contrived and the author sometimes seems to be trying too hard. He just is quite simply not as good a writer as Charteris.

On the other hand the early Norman Conquest tales do possess a great deal of energy and exuberance, and a fair amount of inventiveness. The best of them, such as Miss Dynamite, are extremely entertaining.

Conquest Marches On opens with the hero finding himself in trouble with the police. He has been accused of interfering with a young woman on a tube train. Of course he did nothing of the sort. In fact the young lady launched a bizarre and entirely unprovoked attack on him. It’s all very odd and Conquest is convinced that there’s something strange and sinister going on, and that means there is likely to be some sort of adventure in the offing.

Every time either the police or Conquest think they’ve tracked down the Voice it turns out to be just another minor hireling. The Voice is always one step ahead of them.

The Voice certainly recognises Conquest as a serious danger and makes several attempts to eliminate him but Norman Conquest is not so easy to kill. And the Voice has made the mistake of threatening Conquest’s lady love and that’s a very foolish thing to do.

There are plenty of narrow escapes, plenty of dastardly schemes to remove our hero from the land of the living, and there’s an abundance of the kinds of things that make the pulp fiction of this era so much fun - secret passageways, hidden rooms, concealed microphones and cameras, ingenious communication devices.

And lots of gadgets. Norman Conquest was one of the first thriller heroes to rely heavily on gadgetry. It does give these thrillers a bit of a comic book feel, a bit of a Dick Tray flavour. Which is no great problem, since the Norman Conquest books are very pulpy, much more pulpy even than Charteris’s Saint stories or the Bulldog Drummond books. This is very much pulp fiction and it would even be fair to describe it as trash fiction, but it’s entertaining trash. Brooks throws in every pulp ingredient he can think of (and he can think of many). Brooks had absolutely zero literary aspirations. He came from the school of writing in which authors were paid by the word and in which success as an author depended on the ability to maintain an enormous output. There’s nothing polished about his work, there’s none of the dazzling style of a Charteris, but in its own very down market way it works well enough.

Conquest Marches On doesn’t quite have the manic energy of Miss Dynamite or Mr Mortimer Gets the Jitters but if you accept it for what it is it’s pretty enjoyable. Recommended.
Posted by dfordoom at 10:59 PM