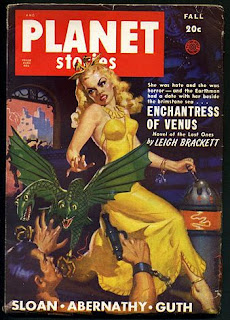 Leigh Brackett’s 1949 novella Enchantress of Venus introduced her most famous series character, Eric John Stark. It’s a fairly typical sword-and-planet adventure but it’s a well-crafted example of the breed. It appeared in the pulp magazine Planet Stories in 1949.

Eric John Stark is both a barbarian and a civilised man. He comes from the savage world of Mercury but he has picked up most of the arts of civilisation living on Earth. The barbarian spirit is however still very strong within him. He’s a fairly typical hero of the sword-and-sorcery/sword-and-planet type. He is possessed of enormous physical strength, he is brave, virile and resourceful. He is quick-tempered and can be impulsive but he is gentle towards women. Unless of course they turn out to be beautiful but evil and dangerous women and of course this story just happens to feature such a woman.

The setting is Venus. Leigh Brackett’s Venus is a world that never sees the sun, a semi-barbaric world of clouds and mists. In this novella the specific setting is even stranger. The Red Sea is not an ordinary sea. It is not a liquid but a gaseous sea, composed of a gas so heavy and so dense that ships can sail upon it. It also differs from ordinary seas in that although moving through it is not unlike swimming you can speak and breathe even at the bottom of the sea.

The Venusians who live in the region of the Red Sea are pale and blonde and at best semi-civilised. Like all of Brackett’s Martians and Venusians they are very close to being human, but with a few subtle differences. The women are attractive but have the disconcerting habit of always being naked from the waist up (this is a story written for the pulps so there has to be some sexual titillation factor).

After ship’s captain Malthor tries to kill him for no apparent reason Stark ends up in a city on a gulf in the Red Sea, a city renowned for piracy and slavery and assorted debaucheries but it is now a city under the shadow of a much more serious malevolent influence. The evil of the Lhari. They are a different race and there are only a handful left but they dominate city and their potential for evil is vast. They are breathtakingly cruel and obsessed with their own imminent demise which they intend to avoid by any means no matter how ruthless. And there is a secret that may allow them not merely to survive but to dominate the whole planet. Stark will have to stop them and in any case he has his own personal grievance against them.

Two women will play important parts in this story. Zareth is Malthor’s daughter, a gentle girl who has stoically endured repeated whippings from her father but who now sees in Stark a chance to escape. And perhaps a chance for love. She is timid and frightened but she has an unexpected inner strength and courage. Varra is a whole different ball game. Even by the standards of the Lhari she is dangerous. She tells Stark that he is the first real man she has encountered in a very long time and she is obviously the sort of woman who is very interested indeed in real men.

The secret mentioned earlier lies at the bottom of the Red Sea, in a ruined city built by yet another race.

This is a novella so there’s not much scope for complex plotting but it’s a decent enough story, although perhaps not quite as dazzlingly imaginative as some of Brackett’s other tales from this period of her career. This is more a fairly routine sword-and-planet adventure, but executed very competently.

There’s a genuine sense of evil, and of decadence. There’s also a decidedly bleak and tragic edge to the tale.

The settings are the most impressive part of this story. Brackett was very good at creating worlds that were clearly alien whilst still seeming reasonably plausible.

There isn’t a great deal of depth to Stark but he’s an effective action hero. The two women, Varra and Zareth, are more interesting.

Enchantress of Venus is enjoyable and fairly stylish pulp fiction. Recommended.
Posted by dfordoom at 3:53 PM