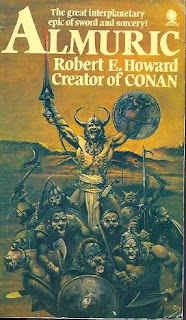 Robert E. Howard wrote a vast number of short stories but only a handful of novels, including Almuric which was serialised in Weird Tales in 1939 (three years after the author’s death).

Esau Cairn is a young American of immense physical strength although unfortunately afflicted with a rather short temper. He becomes enmeshed in a web of deceit spun by crooked politicians and he has resigned himself to facing execution on trumped charges. He is given a surprising opportunity to save himself, although at a terrifyingly high price. A scientist acquaintance has discovered a means of transporting living beings, including people, across the vast reaches of outer space. The only problem is that such trips are strictly one-way. Esau Cairn however is willing to accept the price.

He finds himself on the fantastically distant planet Almuric. It’s a planet on which everything seems to resemble some earthly equivalent, but not quite. There is always a slight difference.

For a solitary man, unarmed and unequipped with any tools (it is only possible to transport living things across space), existence on this primitive planet is a challenge. Esau Cairn is however a man of remarkable determination and endurance as well as strength.

There are several human-like sentient species on Almuric. The Guras are somewhat bestial in appearance but they are brave warriors. They’re the sorts of barbarians who appealed to Howard’s imagination, with a certain degree of honour. Their women are very different. The Guras have evolved a rather extreme sexual dimorphism. The men are powerful, hairy and apelike while the women are smooth-skinned, gentle and very feminine. And for all their apparent barbarism the Gura men treat their women with extravagant kindness (apart of course from occasional physical chastisement which they seem to accept).

The Yaga are more worrisome, winged cannibal men of exceptional cruelty. Their queen, Yasmeena, is beautiful but terrifying and frighteningly capricious.

There are other man-like creatures, varying in intelligence and savagery. Many of these have been enslaved by the Yaga. The Yaga are particularly fond of carrying off the women of the other sentient creatures. You might expect that these maidens would be facing the proverbial Fate Worse Than Death. In fact they’re facing horrors that are almost unimaginable. The depraved Yaga certainly use their captive women as sex slaves but they have other uses for them as well.

Esau Cairn will face many dangers and countless horrors but he will also find love in the person of the gentle but high-spirited Altha.

Almuric is very much in the mould of the sword and planet adventures of Edgar Rice Burroughs. Howard could not match the extraordinary inventiveness of Burroughs but his writing has its own strengths. Few writers have ever been able to match Howard when it came to savage action scenes. He also had a gift for atmosphere, especially for creating an atmosphere of skin-crawling horror. And of course Howard had the ability to create great barbarian heroes, mighty warriors but with a degree of gentleness towards women and with the intelligence and instinctive wisdom to complement their physical prowess. Esau Cairn might be a 20th century American but he is in fact a natural barbarian (which is part of the reason he finds himself exiled from an Earth on which he was never able to fit in).

There’s always a touch of horror to Howard’s fantasy tales, and almost always there are hints of sadism and cruelty, often with sexual overtones. It’s all combined with odd dashes of chivalry. Almuric has more than its share of such qualities. Naturally there’s non-stop violence, some of it pretty hair-raising.

This is a sword and planet rather than a sword sorcery tale so there’s no magic but there are monsters. Howard, who had no great interest in science fiction, solves the problem of finding a plausible way to transport his hero to a distant planet in the simplest possible manner. He doesn’t explain it at all.

This is a short novel but aside from having lots of action it also has copious amounts of plot. The pacing is breakneck and there are no dull spots.