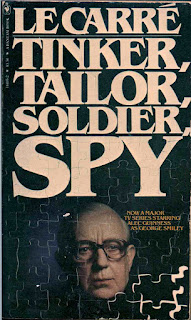 Tinker Tailor Soldier Spy, published in 1974, is one of John le Carré’s most celebrated spy novels. It deals with the hunt for a mole in the British intelligence agency known as the Circus. It was the fifth of the George Smiley novels.

The Circus is a fictionalised version of the British Secret Intelligence Service (or MI6), known as the Circus because it has its headquarters in Cambridge Circus.

I certainly do not intend to offer any hints as to the mole’s identity (although in fact it’s blindingly obvious right from the start).

An important Soviet spy had been trying to defect to the British but the defection went badly wrong. There is the possibility the Russians might have been tipped off and that the tip-off may have come from London. A couple of years earlier another Circus operation, in Czechoslovakia, had also ended in disaster with a top Circus field agent being betrayed and shot and with the Circus’s spy networks in that country being comprehensively blown.

The awful possibility must be faced that there is a mole in the Circus, a mole being an enemy agent planted years earlier who has now worked himself into a position of considerable power and influence. In fact this particular mole, if he exists, must logically be one of the five or so top men in the Circus. Given that the mole (who has been given the codename Gerald) is lodged very close to the top of the Circus hierarchy it’s obvious that the investigation cannot be an internal one. There is the option of calling in the Security Service (MI5) - catching spies is after all their job. That however is quite unthinkable. If there’s one organisation the Circus hates more than the KGB it’s MI5. The only remaining option is to have the investigation carried out by an outsider, but he has to be an outsider who knows the workings of the Circus intimately. A retired senior Circus officer would be ideal. Someone like George Smiley for instance.

Smiley will get some help from inside the Circus and from his friend Inspector Mendel from Special Branch. The investigation will be frustrating, and dangerous. The biggest danger is that if Gerald or his Soviet controllers get wind of it then the people who might be able to provide Smiley with vital information could suddenly meet with fatal accidents.

For Smiley the investigation is a voyage into the past. The clues he needs could be buried a long long way into the past, probably as far back as the years before the Second World War. The likely suspects were all recruited by the Circus in the 1930s and Gerald might well have been recruited by the Soviets at roughly the same time. Smiley will also have to delve very deeply indeed into the events surrounding those two disastrous failed operations.

It’s a case that requires painstaking attention to detail. This is not the kind of spy tale that involves a lot of action, but then le Carré has never be interested in writing action thrillers. His aim has been to write rather cerebral and somewhat literary spy thrillers with an emphasis on character and psychology.

Unfortunately George Smiley is not a very interesting character. We find out all we need to know about him very early on and the remainder of the book adds nothing to our understanding of him. We know he is a very good spy and that his personal life is a shambles. We know that his wife has treated him appallingly and that he is either too weak or too apathetic to do anything about it. What we don’t learn is why these things are so. We don’t find out what it is that makes him a very successful spy (in fact we don’t even find out why he became a spy) and a very unsuccessful human being. George Smiley is the absolute antithesis of James Bond but Bond is actually a far more interesting and complex character.

This problem extends to most of the other characters as well. When we discover Gerald’s motivations they are disappointingly vague and banal. Smiley’s nemesis, the KGB spymaster Karla, is an even thinner character.

While le Carré proves himself to be very weak in the area of characterisation he does have other strengths as a writer. He is particularly good at describing what might be called institutional psychology. He describes in vivid and fascinating detail the culture of the Circus, an organisation based not merely on deception (as any espionage organisation has to be) but on a fatal web of self-deception. Those who work for the Circus might believe they are essential to Britain’s security but it’s really an illusion. The Soviets aren’t interested in stealing British military secrets because Britain doesn’t have any military secrets worth stealing. They aren’t interested in British political or foreign policy secrets because Britain just isn’t important enough. The only players who count in the Cold War are the US and the Soviet Union and infiltrating the Circus is merely a way for the Soviets to strike indirectly at the US - any phony intelligence they feed to the British will be passed on to the US. In the world of the Cold War Britain counts for very little but at the Circus they’re still reliving the glory days of the Second World War and the British Empire.

There’s also a refusal to admit that maybe the KGB is more disciplined and more professional (and more realistic) than the spies of the Circus who are little more than enthusiastic amateurs. Most fatally, the Circus is vulnerable because they desperately want to believe they have pulled off an amazing coup and they don’t want to consider the possibility that Karla is several steps ahead of them.

Another major strength of the book is the lovingly intricate depiction of the “tradecraft” of the professional spy.

Tinker Tailor Soldier Spy is fascinating reading for its insights into group psychology, the inner workings of espionage and the moral dilemmas that are unavoidable elements of the world of the spy. Recommended (although nowhere near as good as le Carré’s earlier The Looking Glass War).