Under the Red Robe by Stanley J. Weyman 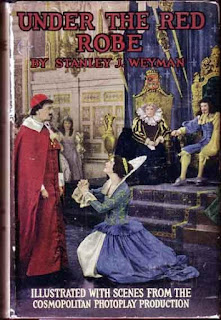 Stanley J. Weyman (1855-1928) was an extremely popular writer of swashbuckling adventure novels. While other writers of such works from that era (like Anthony Hope and Rafael Sabatini) still retain a following for some odd reason Weyman is now entirely forgotten. His biggest success came in 1894 with Under the Red Robe, a tale of adventure set in France in 1630, during the Thirty Years War.

The book’s hero, M. de Berault, is a bit of a rogue. Which is putting it mildly. He’s a gambler and a notorious duellist. He has now killed yet another man in a duel. As it happens Cardinal Richelieu is determined to stamp out duelling. Anyone guilty of duelling is to be hanged. He is looking for someone to make an example of and de Berault would be ideal. M. de Berault can almost feel the hangman’s rope tightening about his neck. However de Berault did at one time dave Richelieu’s life so the cardinal decides to give him one last chance - on the condition that de Berault does as small favour for him.

This small favour turns out to be extremely dangerous and rather complicated. He has to bring M. de Cocheforêt back to Paris. M. de Cocheforêt has been involved in the plottings of Richelieu’s enemy, the duc d'Orléans (the brother of the king). M. de Cocheforêt will certainly not come willingly and the cardinal wants him alive.

It is with some misgivings that de Berault sets off for Béarn to carry out the task. On arrival his misgivings are strengthened considerably. Somehow he will have to find a way to gain admittance to de Cocheforêt’s house and at a time when the man is actually there - de Cocheforêt is in hiding in Spain but he is known to be crossing the border secretly at regular intervals to visit his wife. It will be necessary to gain the trust of Madame de Cocheforêt and her sister but the women and their servants are understandably very much on their guard.

As de Berault feared things do not go smoothly and there is a further problem. Our hero might be a gambler and a ruffian and even a bit of a scoundrel but he is still a gentleman. In fact he is very conscious of his honour and taking advantage of a lady is something that in normal circumstances her would never consider doing. These are however not normal circumstances - if he fails in his task he knows that the hangman’s rope awaits him in Paris. Of course he could simply slip over the border to Spain, but running away is also something that a gentleman cannot do and moreover he has given his word to Richelieu and breaking his word is yet another thing that a gentleman cannot do. Being a gentleman is not always easy, and being a scoundrel and a gentleman can get very complicated indeed.

There’s not a huge amount of actual action but it’s a well-plotted tale of betrayal, divided loyalties and political intrigue with a dash of romance. Highly recommended.
Posted by dfordoom at 6:44 AM