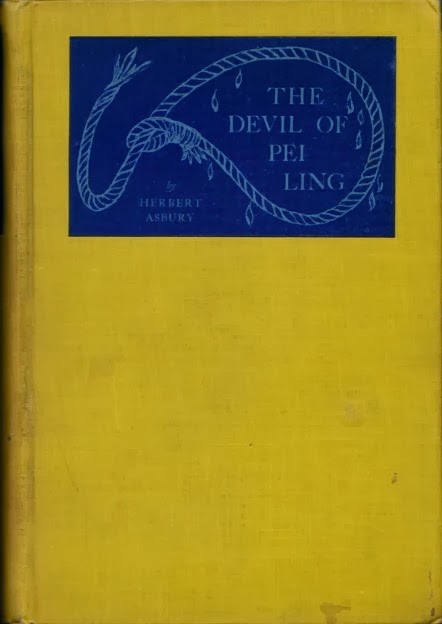 Published in 1927 and with a title like The Devil of Pei Ling you might expect this novel to be a Fu Manchu imitation. That is perhaps partly true. It does have some Yellow Peril tinges but mostly it’s a fairly straight if very pulpy occult thriller.

Herbert Asbury (1889-1963) was best known as a true crime author, The Gangs of New York (filmed a few years back by Martin Scorcese) being perhaps his most famous book. Asbury had a taste for the lurid and the sensationalistic, both of these qualities being present in abundance in The Devil of Pei Ling.

The narrator is a doctor who has encountered a very unusual case, a woman brought to hospital as an apparent road accident victim. Her injuries seem minor but she will not speak. And the appears to carry the marks of the Stigmata.

The narrator’s friend Inspector Conroy of the New York police has also encountered an unusual case, the murder of a prominent judge. It is impossible to explain how the murder was accomplished, there being no apparent way he murderer could have gained access to the judge’s room. The evidence of the judge’s butler is the really disturbing element. When he entered the judge’s study he saw dripping blood everywhere and a rope with a noose, but when the police arrived they found no traces of blood and no rope.

Conroy had received a strange telephone call warning him of the murder.

These two strange events seem entirely unrelated, but are they?

Conroy and his medical friend soon find themselves investigating another strange murder. They will be plunged into a world of horror, confronting an evil that seems to be unstoppable.

The title suggests an oriental origin to the evil, which proves to be more or less the case. The devil in question is the object of devotion to a cult of devil-worshippers in China, China and Tibet being (if we are to believe this novel) major centres of devil-worship of the most barbarous kind.

This book has devil-worshippers, demonic possession, human sacrifice, mutilations, torture, Black Masses, paranormal phenomena and heathen idols that come to life. And toads. Lots of toads. And lots of blood. What more could you want? It’s all handled in a very pulpy and deliciously trashy style.

Sadly this novel appears to have been Asbury’s only foray into the realm of occult thrillers.

The Devil of Pei Ling is long out of print but used copies can be found if you are prepared to search hard enough. And you will find the effort is well worth it. A delightfully trashy extravaganza of thrills. Very highly recommended.
Posted by dfordoom at 9:43 AM