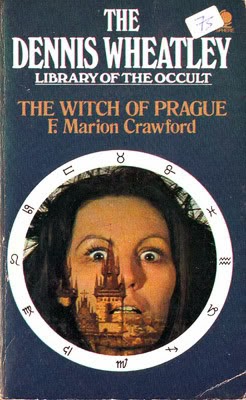 F. Marion Crawford’s The Witch of Prague, published in 1891, is more a strange occult love story mixed with reflections on philosophy and the mind than a conventional novel of gothic horror.

Francis Marion Crawford (1854-1909) was an American writer known for his weird fiction.

The witch of the title, Unorna, does not brew strange potions or cast spells.  Her one power is the power of hypnosis, but in her this power is developed to an extreme degree.  She can hypnotise anyone against their will, and secure complete control of their minds.  She does not use this gift in the service of any diabolical entity.  In so far as she is evil, she is evil through selfishness and through a giving in to the temptations of the power she possesses, and through utter ruthlessness in accomplishing her ends, rather than through any particular malevolence.

She has a collaborator - a mysterious, wealthy dwarf, a man of great learning and influence.  This man, Keyork Arabian, has conceived a project to conquer old age and death, and is using an elderly scholar who had been mentally enslaved by Unorna, as an experimental subject.  When Unorna meets a enigmatic stranger, known only as the Wanderer, she finds a new purpose in her life, a new use for her powers.  She has fallen in love with this man, and means to have him, by fair means or foul.

The most interesting thing about the book is the way it illustrates the 19th century obsession with hypnotism, and the growing fascination with the relatively new science of the mind.  There’s a suggestion that occult powers are in fact simply highly developed but little understood natural powers.  The book shows a deep interest in the mystery of memory, and the links between memory and personality, and different states of consciousness.

It also reflects, indirectly, the retreat of religion before the advance of science, with evil being seen in a rather modern way as more to do with a failure to adjust ourselves to reality and an unwillingness to deal honestly with our desires and their consequences for ourselves and others, rather than in any strictly religious sense.