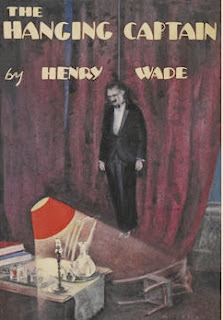 Henry Wade was the pseudonym used by Major Sir Henry Lancelot Aubrey-Fletcher, 6th Baronet CVO DSO (1887-1969) for his detective novels. He’s one of the more unjustly neglected writers of the golden age of detective fiction.

Wade’s main series detective was Inspector John Poole but The Hanging Captain, published in 1932, features two other detectives, both of whom are intriguing characters in their own right.

There had been a time when Captain Herbert Sterron had seemed to be a very lucky man. The dashing dragoon officer had a promising military career and a lovely wife, and an income that was ample for the maintenance of Ferris Court, a handsome Tudor mansion that had been in the Sterron family for four hundred years. Just prior to the outbreak of the Great War a change came over the captain, a change that was very much for the worse. So much so that when two decades later he hanged himself it came as no great shock.

There certainly seems no doubt that his death was suicide. And yet Superintendent Dawle is not quite satisfied. The Chief Constable is anxious to have the whole matter dealt with as expeditiously as possible, having no desire to start digging into the private lives of prominent county families. The Chief Constable’s hopes are dashed when Sir James Hamsted throws a spanner in the works, raising string suspicions of foul play. Hamsted had been staying at Ferris Court at the time of Sterron’s death. Hamsted is a harmless old gentleman occupying an important if rather dull government post, or at least that’s the impression he gives. In fact Hamsted is a medical practitioner with an extensive knowledge of medical jurisprudence, having occupied the post of coroner for many years. Sudden death is something he knows a great deal about, and he is far from satisfied.

With sinking heart the Chief Constable bows to the inevitable and Scotland Yard is called in. Detective-Inspector Lott is assigned to the case. Like most Scotland Yard men Lott regards county constabularies with a considerable amount of disdain and he expects that working with a well-meaning but rather incompetent bumpkin like Superintendent Dawle will be something of an ordeal. He will soon discover that Superintendent Dawle is no bumpkin and is far from incompetent. He’s a shrewd old bird who can teach the Yard a thing or two about criminal investigations.

Much of the interest in this book comes from the interplay between Dawle and Lott. Wade was rather stronger in the area of characterisation than most golden age detective writers and the two detectives are both well fleshed out and fairly complex characters. The rivalry between local police and Scotland Yard officers is a theme that runs through many English detective novels of this era. Wade handles it with particular skill as the two rival detectives match wits and a mutual respect slowly develops between them.

The other key characters are equally interesting. Wade is strong on plotting and he’s especially strong on motive. The various suspects all have possible motives but these motives are by no means clear cut. In several case the motives have a definite sexual angle that is dealt with more openly than one generally expects in detective fiction of this era.

One of the suspects happens to be High Sheriff of the county, with aspirations to be Lord Lieutenant. The author himself served as High Sheriff and subsequently Lord Lieutenant of Buckinghamshire. Not surprisingly Wade displays in his crime fiction a keen understanding of the ins and outs of county politics and the subtle pressures they can exert on police officers in the course of an investigation into murder involving notable county families. THis is one of the elements that makes this book more than just another country house murder mystery.

Wade’s crime novels can be difficult to find but they are certainly worth the effort. The Hanging Captain is a splendid example of the golden age detective novel. Highly recommended.
Posted by dfordoom at 3:13 AM