The Case of the Counterfeit Eye 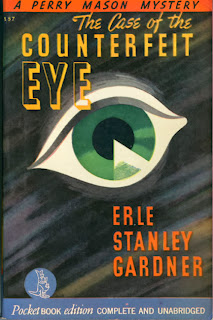 The Case of the Counterfeit Eye is one of Erle Stanley Gardner’s earlier Perry Mason mysteries, published in 1935. And it’s a treat for Perry Mason fans.

Perry Mason is approached by a client named Brunold who has an unusual problem. One of his glass eyes has been stolen and replaced by an inferior quality eye. His fear is that the missing eye could be used to frame him for a crime.

Perry also has another client, a young man who has been embezzling money from his employer, a notorious loan shark.

These two sub-plots will come together in an intricate manner which involves murder, divorce, inheritances and glass eyes.

Gardner’s plots were always clever but the real interest of the Perry Mason novels, at least the early ones, lies in the methods of the famous trial lawyer. Perry Mason is not exactly unethical but he certainly pushes legal ethics about as far as they can possibly be pushed, and there are times when he comes perilously close to unethical or even downright illegal practices. Mason is not a rogue lawyer but he believes in doing everything he can to protect the interests of his clients.

Mason’s methods naturally enough tend to outrage the police and in the past they have aroused the ire of the District Attorney. Now there’s a new DA, Hamilton Burger, who will of course feature in further Perry Mason stories. Burger isn’t exactly delighted by Perry’s methods but he is inclined to think that those methods, while they might involve sailing rather close to the legal wind, are essentially legitimate. The new DA’s tolerance will however be stretched to the limit in the course of this case.

Mason’s flexible approach to legal ethics makes him an interesting character. There is certainly a degree of moral ambiguity about him. The DA considers Mason to be a very good trial lawyer but an even better detective. The really interesting aspect of Mason’s character, and the chief appeal of Gardner’s novels, is the extraordinary way in which he manipulates the legal system to serve his clients’ ends. Mason knows every lawyer’s trick in the books plus a few he’s invented himself. Gardner had been a California trial lawyer himself and his specialised legal knowledge is put to exceptionally good use in his novels.

The Perry Mason stories, naturally enough, always involve at least one court-room scene. Court-room scenes can become rather tedious and Gardner was very much aware of that danger. He never allows the court-room scenes to dominate the action too much. He also has a knack for basing important plot elements on complex points of law without running the risk of confusing the reader or boring him with too much legal detail. He explains the legal points lucidly and succinctly.

Perry Mason is a man who enjoys his work. He likes to win his cases but the real pleasure for him lies in pitting his wits against criminals, against the police, and against the DA. The joy he takes in this is communicated to the reader and helps to make these novels so much fun. And The Case of the Counterfeit Eye is great fun indeed. Highly recommended.
Posted by dfordoom at 8:15 AM