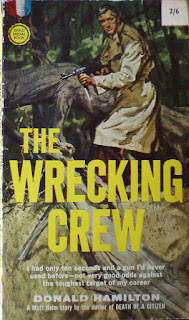 Not only is the plot entirely different, the tone of the novel is a million miles away from that of the films. The Matt Helm novels were intended as serious hardboiled spy stories and on that level they work pretty well. They were obviously influenced by the success of Ian Fleming’s Bond novels - there’s plenty of sex, plenty of violence and also plenty of glamour. Both Fleming and Hamilton were surprisingly successful in combining glamour with hard-edged and often brutal stories. Hamilton’s novels might not be quite as good as Fleming’s but they’re certainly not without interest.

The early novels in this series have to be read in sequence. Matt Helm had been a wartime operative (with the code-name Eric) for a very hush-hush US agency that the Germans nicknamed the Mordgruppe. They were also known in some quarters as the Wrecking Crew. Their boss was known only as Mac. They operated behind enemy lines and their speciality was assassination. After the war Helm retired into civilian life, moved to New Mexico, married and had a family and made a living as both a photographer and an author of western novels. How he came to find himself working for Mac’s outfit again well over a decade later is told in considerable detail in the first novel in the series, Death of a Citizen. That novel provides essential and detailed background information on the kind of man Matt Helm is and on his wartime career and the beginnings of his new career as a Cold War spy.

The Wrecking Crew sees Helm is Sweden, tracking a shadowy Soviet agent named Caselius. An American journalist named Taylor had uncovered some facts about this Soviet spy and as a result had been gunned down with a machine pistol in East Germany. His wife Louise survived the attack and she’s now the best lead they have. She’s writing an article about industrial and mining developments in northern Sweden for a magazine so Helm is off to Sweden where he will be taking the photographs to accompany the article. His mission is to kill Caselius.

There’s no namby-pamby nonsense about bringing Caselius to justice. Mac’s agency doesn’t work that way. They deal with people who are much too dangerous to be allowed to live. Helm accepts this as part of his job. He killed in the cause of freedom during the war and he sees no problem in killing in the cause of freedom in this new undeclared war, the Cold War. The stakes are just as high, the dangers are just as real, and his targets are just as much of a threat to civilisation.

Helm got the assignment because his cover as a photographer is perfect for the job and he speaks Swedish (he is in fact of Swedish ancestry).

First Matt has to make contact with the resident American intelligence agent in Sweden, or rather she makes contact with him. Sara Lundgren doesn’t like Helm and she doesn’t approve of his methods. Working with her is going to be a challenge. Working with Louise Taylor will be a challenge of a different sort. Both are, in their very different ways, dangerous women. And they’re not the only dangerous women Matt will encounter. There’s also Elin, a very very distant cousin of his.

Helm will also encounter some very dangerous men, some of whom may or may not be on his side. In fact it becomes more and more difficult to tell who is on his side. Everyone seems to have their own agenda and everyone he meets could turn out to be really working for the Russians. The ones who are simply working for the Soviets aren’t the problem. Much more difficult are the people with personal agendas. Most difficult of all are the starry-eyed idealists who think they are saving the world. Matt doesn’t trust anyone who thinks they are saving the world, and it’s a sound policy.

Matt Helm is a professional assassin and he’s a tough guy. He has his own personal problems to deal with and compared to many fictional secret agents he’s a remarkably well-rounded character. He has a personal life and he has emotions, and he doesn’t always enjoy the things he has to do. He is not troubled by killing; he believes that the people he kills are being killed for good reasons and he doesn’t lose any sleep over it. He’s not a conscienceless killer; he simply believes that sometimes it is necessary. But in operations of this kind other people can get killed as well, and that does sometimes bother him.

These novels lack the kind of tedious nihilistic cynicism that started to afflict spy fiction during the 60s. They don’t have that “both sides are just as bad as each other” kind of attitude. Matt Helm moves in a world where there are good guys and bad guys. The good guys aren’t perfect but they’re still the good guys and the bad guys aren’t necessarily psychopathic monsters but they’re still the bad guys. Personally I find that refreshing.

It has other things going for it, but most all all, The Wrecking Crew is fast-paced action-filled fun. Recommended, but if you read Death of a Citizen first you’ll appreciate The Wrecking Crew even more.
Posted by dfordoom at 1:52 AM