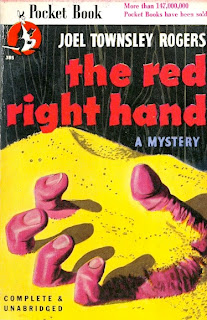 Joel Townsley Rogers was a prolific writer of short stories in various genres, but he wrote only four novels, the best-known being his 1945 mystery The Red Right Hand.

This novel is notable not so much for its plot as for the innovative (and for 1945 quite daring) method of narration. It’s almost stream-of-consciousness.

Dr Henry Riddle is the first-person narrator. He was not exactly a witness to a murder, but he was a witness to some of the events surrounding an unusual murder.

Elinor Darrie and her fiance Inis St Erme were heading for Vermont to get married. They picked up a hitchhiker, a man the investigators of the crime will come to know as Corkscrew for his unusual gait when walking. The hitchhiker apparently killed St Erme and tries to kill Elinor. He then sped off in St Erme’s car (or rather the car St Erme had borrowed from a man named Dexter in New York). The car then ran over another man, a half-Indian named John Flail. After that it ran down Mrs Wiggins’ dog.

These separate events can be pieced together to show the killer’s movements after the murder of St Erme. The odd thing is that Dr Riddle, whose car had broken down at the turn-off to the Swamp Road, should have seen the murder car, but he didn’t.

The entire book follows the thought processes of Dr Riddle as he tries to put the pieces of the puzzle together. It is an endeavour that will take him to the verge of madness.

There are several pieces of the puzzle that just won’t fit. Most worrying is his failure to see the murder car. There is simply no way he could have not seen it. But he didn’t see it. And why is St Erme’s right hand missing when the body is found? How could Dr Riddle have seen John Flail in a place where he could not have been at the time? Why was the psychiatrist and criminologist MacComerou murdered? MacComerou had come too close to the truth, but what truth? And the other murders? Riddle just can’t find any rational way to fit those pieces together.

This is a stylistic tour-de-force. It’s a very bold and almost experimental crime novel. It’s very much in the real of psychological crime novels, of the type that writers like Jim Thompson would later pursue with much success. For 1945 it’s definitely ahead of its time, a pointer to the directions in which crime fiction would go in the 1950s.

Rogers does an excellent job in dissecting the thought processes of the narrator. The narrative jumps back and forward in time, just as anyone’s thoughts would do if they were trying to puzzle out such a mystery. The narrator keeps going back to earlier events, trying to find the weaknesses in the various theories he comes up with, trying to discover what it is that he has missed, what it is that perhaps he has misinterpreted. He knows that he has all the facts necessary to solve the crime, but the facts seem to be contradictory and ambiguous. Can he solve the crime without driving himself over the edge of insanity?

An unusual mystery, and one that deserves to be much better known. Highly recommended.
Posted by dfordoom at 12:37 AM