Rafael Sabatini’s The Trampling of the Lilies 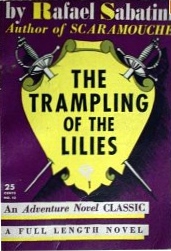 Rafael Sabatini (1875-1950) was one of the grand masters of the swashbuckling adventure tale. He was born in Italy but lived in England from the age of seventeen onwards and wrote all of his many books in English. The Trampling of the Lilies, published in 1906, is one of his early efforts.

Shortly before the outbreak of the French Revolution a man named La Boulaye is the secretary to the Marquis de Bellecour. La Boulaye has imbibed deeply of the poisonous philosophy of Jean Jacques Rousseau and is a revolutionary in the making.

La Boulaye is unfortunate enough to be in love with the marquis’ daughter Suzanne. Unfortunate, because such a love was impossible. Although he is an educated man La Boulaye’s birth was humble and the social gulf between such a man and the nobility was very wide indeed.

La Boulaye is unwise enough to declare his love. His reward is to be spurned by Suzanne and horsewhipped by her father. Later that day La Boulaye comes across a peasant wedding, and witnesses a scene that will have a momentous effect on both his own destiny and that of the family of de Bellecour. The marquis asserts his ancient right, the droit de seigneur, to take the virginity of the young bride. La Boulaye’s blood boils and he shoots one of the marquis’ servants and attempts to shoot the marquis himself. As a result the marquis orders that he be flogged to death.

He is flogged until he appears to be dead, and them Suzanne de Bellecour intervenes and stops the punishment. La Boulaye proves to be still alive and thanks to Suzanne he is able to flee. Suzanne’s feelings towards him are confused to say the least. She cannot possibly admit to herself that she might be in love with him. He is little better than a peasant and as such scarcely human. It is an unthinkable idea. She has all the prejudices of her class.

The action them jumps forward four years. It is 1793 and La Boulaye is a powerful man indeed. He is not only a Deputy, but also an intimate friend of Robespierre. His path will again cross with that of Suzanne de Bellecour, with momentous consequences. Despite their own best efforts their destinies are inextricably linked. Suzanne saved La Boulaye’s life once and he will have an opportunity to repay the debt, but at a frightful cost to himself.

Compared to his later books many of the characterisations in The Trampling of the Lilies are somewhat lacking in subtlety. With one notable exception the aristocrats are cruel and arrogant, little more than cardboard villains. To be fair to Sabatini, the revolutionaries are not much better. Surprisingly enough he seems rather sympathetic to Robespierre. How one can paint a sympathetic portrait of such a monster passes all human understanding, but there you have it. Sabatini seems uncertain as to his feelings about the Revolution. He is torn between his natural sympathy for the underdog and his horror at the way events turned out as France was turned into a butcher’s yard.

La Boulaye’s transformation from bloodthirsty revolutionary to romantic hero is not entirely convincing, unless you can accept the idea that love really does conquer all.

The evidence for the actual existence of the droit de seigneur is slight, but it became part of the popular imagination both in the 18th century and today. It was first publicised by Voltaire, who may well have invented the idea. It was a useful stick with which to beat the aristocracy. Sabatini’s sympathies are clearly not with the aristocracy so it’s perhaps not surprising that he makes use of this myth.

There’s not quite as much action as you’d expect in a Sabatini novel, but there is plenty of tension as La Boulaye struggles to find a way to save Suzanne from the guillotine.

Sabatini, even in this early novel, demonstrates his skills as a story-teller. Any adventure novel by this author is worth reading, and this is no exception.
Posted by dfordoom at 12:17 AM