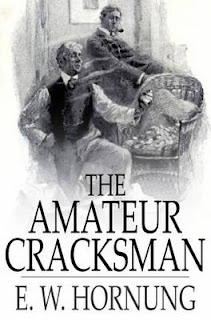 When we think of classic crime novels we normally think of books in which the hero is a detective, but there’s an equally interesting sub-genre with daring but likeable criminals as heroes. Among the best of these are E. W. (“Willie”) Hornung’s tales of the gentleman burglar A. J. Raffles. The earliest of these stories are to be found in the 1899 collection The Amateur Cracksman.

Hornung was Conan Doyle’s brother-in-law. Hornung had already written a story that was a sort of dry run for the Raffles stories and it was Conan Doyle’s suggestion that such a character would be a great subject for a series of stories. This has led to the erroneous assumption that he was Hornung’s literary mentor but in fact Hornung was already an established and quite successful writer before he met Conan Doyle.

Conan Doyle later regretted the encouragement he had given to the Raffles stories, feeling that his brother-in-law had committed the sin of glamourising a criminal. Despite this the two men remained on very good terms and continued to play cricket together, cricket being  a great passion for both of them.

Conan Doyle’s charge that Hornung glamourised Raffles too much is partly true and partly untrue. Raffles was such a successful creation because (like Sherlock Holmes) he was not just a fascinating character but a complex one. Raffles is charming and has his own perverse moral code. He would never rob anyone who could not well afford the loss. He can be a generous friend and is capable of great sensitivity. But he can also be manipulative, egotistical, and at times thoughtless and even callous. And Raffles is aware of the contradictions in his own character. His view of himself is rather equivocal.

His social position is also equivocal. He attended one of the great public schools and is to all appearances a gentleman. But as he admits in one story, he is tolerated by polite society mainly for his cricketing skills. He is widely regarded as the greatest spin bowler of his era, an accomplishment that has made him a public figure. His family background is undistinguished and middle-class. He lacks both the birth and the family connections that would assure his place in society. He is not quite an outsider, but he is not quite an insider either. He exists on the fringe of that world of polite society. To continue to be accepted he needs sufficient money to keep up the style of a gentleman, and money is something he does not have. Or at least it was something he did not have until he discovered that his skills at burglary were as impressive as his skills on the cricketing field.

The stories are narrated by his old school friend Bunny Manders. Bunny had fagged for Raffles at school ad Raffles had always treated him with kindness and respect. In the first story Bunny has lost a great deal of money at cards. He has written a number of cheques to cover his losses but there is not the slightest chance that his bank will honour these cheques since he is in fact penniless. He turns to his old school companion for help. If Raffles cannot help him he intends to shoot himself. Raffles explains that sadly he himself is at that time in equally perilous financial straits, but there is a way he can help. That’s when Bunny finds out that Raffles is a burglar. Bunny will become his partner in crime.

But Raffles is careful to point out that he has nothing in common with the sordid world of professional criminals. He is an amateur, in the true sense of the word - someone who does something for the love of it.

Raffles’ problem is that he cannot earn any money from his cricket. In those days there were two classes of cricketers, Players and Gentlemen. Gentlemen played for the love of the game and were not paid for it. The Players were professionals. If Raffles accepted money for playing cricketer he would lose his social caste. Not only would he no longer be a gentleman as far as the cricket world was concerned - he would no longer qualify as a gentleman in any sphere of life. Luckily being a burglar does not affect one’s social caste, provided one does not get caught of course.

There’s no overt social criticism in these stories but these factors do provide an interesting social subtext, and it was one that Hornung was clearly aware of.

The Amateur Cracksman contains eight stories. Raffles does always succeed - in one story he and Bunny are grateful to escape with their lives, without the loot. In some stories Raffles is committing crimes because he and Bunny have run out of money but in other cases he is motivated purely by the challenge, stealing items that he could not possibly sell. He is after all an amateur. The game is the thing, and Raffles delights in his skill.

The Raffles-Bunny Manders friendship is as complex as the Holmes-Watson friendship. Two men of very different temperaments, and there is certainly an exploitative tinge to the relationship. Bunny hero-worships Raffles, although he is not such a fool as to be unaware of Raffles’ character flaws. It’s the sort of relationship in which modern critics would love to find a homoerotic subtext, but there is none. It is however a fascinating relationship. Bunny is the weaker man in many ways, but not always. He is capable of great courage. Raffles enjoys the hero-worship but is genuinely fond of Bunny.

There is of course the pleasure to be gained from these stories from the rich social settings, and from the contrast between different social worlds. Raffles moves in high society but as a burglar he must also move in a more sordid world, the world of thieves and fences. And like any good Victorian crime fiction hero Raffles is also a master of disguise.

While the character of Raffles is the highlight of the stories Hornung’s plots are entertaining. They’re not as intricate as the plots of actual detective stories but they do have excitement and adventure. Hornung’s style is pleasing and he does on occasion create some memorable minor characters, the outstanding example being the gun-toting diamond merchant Reuben Rosenthall in A Costume Piece, based on a larger-than-life real-life figure, Barney Barnato.

When he created Raffles Hornung was no newcomer to crime fiction, having written some fairly successful stories about the bushranger Stingaree (Hornung had spent several years in Australia and in fact Raffles starts his criminal career while touring Australia with the English cricket team).

The 1977 British TV adaptation starring Anthony Valentine should also be mentioned - Valentine nails the character perfectly, capturing both the charm and the slight undercurrent of sinister exploitativeness and danger.
Posted by dfordoom at 6:56 AM