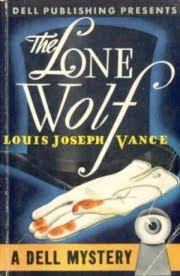 Simon Templar, known as The Saint, is the most famous fictional example of the criminal turned crime-fighter but before The Saint there was the Lone Wolf. This character featured in eight books written between 1917 and 1934 by Louis Joseph Vance.

Michael Lanyard was English-born but brought up in slightly disreputable circumstances in Paris. He has no clear idea who his real parents were. A chance meeting with an Irish thief named Bourke sets the young Lanyard on the road to crime. He becomes the famed jewel thief known as the Lone Wolf.

The first novel in the series, The Lone Wolf, gives us a brief account of his childhood and, more importantly, an account of the events that lead him to abandon his evil ways. He runs foul of a shadowy underworld organisation and finds himself hunted both by his fellow criminals and by the police. He is framed for the murder of a Scotland Yard inspector in a Paris hotel. And he meets Lucy Bannon. She is involved with the mysterious criminal gang that is out to get him but she is not a wiling accomplice to their crimes.

Michael Lanyard finds himself in love for the first time, and for the first time in his life he feels the desire to break free from his criminal past and to make amends for his misdeeds. Perhaps if he can prove himself worthy of Lucy’s love he can find both redemption and happiness.

His first difficulty is simply to stay alive.

Lanyard is an interesting variation on the gentleman thief as personified by such famous fictional characters as Raffles and Arsène Lupin. He may or may not be a gentleman by birth but he is certainly not one by upbringing. He is however gifted with a great deal of natural ability, and not just in the area of burglary. He has been able to pass himself off quite successfully as a gentleman.

There’s enough adventure, action and romance to keep most readers happy although the book doesn’t have the style and panache of Leslie Charteris’s early stories of The Saint.

The Lone Wolf went on to feature in two dozen movies and a TV series although the TV version being set in the US in the 50s lacks the flavour of the original.
Posted by dfordoom at 3:35 PM