Murder Is My Business, by Brett Halliday 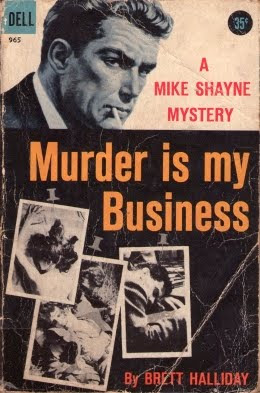 Brett Halliday’s 1945 novel Murder Is My Business is representative of the many hardboiled crime novels of the 30s, 40s and 50s that are now more or less forgotten.

While the hardboiled fiction of people like Hammett, Chandler and Cain has remained in print and gradually gained a degree of literary respectability the works of their contemporaries have not fared so well.

Murder Is My Business is one of Halliday’s Mike Shayne mysteries. These were highly successful in their day and spawned a series of movie adaptations.

Private eye Mike Shayne is engaged to investigate the disappearance of a soldier in El Paso. It soon becomes apparent that the disappearance is part of a wider conspiracy that ultimately proves to involve Nazi agents in the US, bogus silver mines, a crooked local election and an old love affair.

Mike Shayne is a slightly more cynical character than Philip Marlowe but he still manages to serve the cause of justice, although Shayne likes to combine this with a healthy personal profit as well. The plot is complex but it all comes together quite satisfactorily.

I suppose that in some ways this book will strike some readers as being Philip Marlowe Lite. It has the background of official corruption that Chandler’s novels had, and it has
the same kind of hardboiled dialogue. But since Halliday published the first of his Mike Shayne novels in the same year that Chandler published his first novel it would be unfair to characterise him as a mere imitator.

Halliday does the hardboiled thing pretty effectively and the result is a highly entertaining little book.
Posted by dfordoom at 1:56 AM