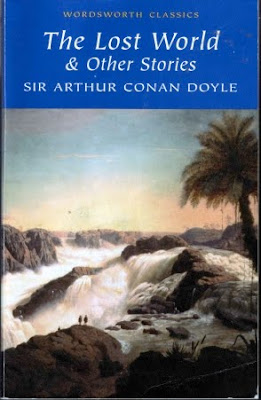 As much as I adore the Sherlock Holmes stories it always saddens me that Sir Arthur Conan Doyle’s other fiction often gets overlooked. He wrote superb historical novels, some great horror short stories (including the one the movie The Mummy was based on, tales of adventure on the high seas and just about every other genre you can think of. And he wrote science fiction. Like The Lost World.

This short novel is not quite my favourite Conan Doyle science fiction tale. The Maracot Deep is for my money stranger and more original. But The Lost World, published in 1912, remains the classic story of its type.

A young newspaperman named Malone sets out to impress his girlfriend Gladys by doing something brave and daring. And attempting to interview Professor Challenger certainly requites both courage and daring. The eccentric scientist has a famously violent temper and has put a number of journalists in hospital. And he’s in an even worse mood since he returned from his recent expedition to South America.

Challenger had came back with an extraordinary tale to tell but unfortunately his supporting evidence had been lost on the return journey and his account was met with ridicule and venomous hostility by his many scientific enemies. Surprisingly he takes a liking to young Malone and invites him to a lecture he is giving. When the Professor tells the audience that he had discovered a lost world filled with prehistoric creatures he is greeted with laughter and catcalls. He throws out a challenge to anyone prepared to set out for South America to establish the truth of his story. There are three volunteers - Professor Summerlee (his most bitter scientific adversary), famous big-game hunter and adventurer Lord John Roxton and Malone whose enthusiasm and determination to impress Gladys got the better of him.

And there is indeed a lost world. An immense plateau which seems to have no means of access, but eventually our intrepid explorers find an ingenious way to enter this forgotten land. They find dinosaurs, isolated for millions of years, but other more advanced forms of life has at various later times managed to reach this plateau. There is a primitive human civilisation, and there are apemen.

Other lost world tales have more ingenious and more inventive plots but there are two areas in which Conan Doyle’s story stands supreme. The first is simply Conan Doyle’s skill as a story-teller. The second is characterisation, most importantly in the creation of the extraordinary personage of Professor Challenger. Challenger is not merely eccentric and irascible, he’s violently insane and frighteningly unstable. But he is a genius, and he is immensely entertaining.

The Lost World is a ripping adventure yarn. Recommended.
Posted by dfordoom at 10:44 AM