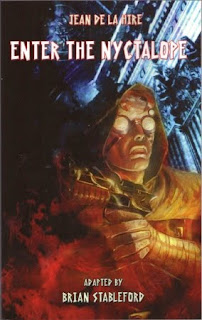 In the early decades of the 20th Jean de la Hire wrote a series of popular French pulps about the Nyctalope. The Nyctalope was a kind of superhero, with the ability to see in the dark. In 1933 de la Hire provided us with an origin story for him in the form of Enter the Nyctalope (L'Assassinat du Nyctalope or The Assassination of the Nyctalope).

It is 1912, and Leo Saint-Clair’s father Pierre us a brilliant engineer who has devised a brilliant invention called Radiant-Z that can control all the world’s radio waves. Unfortunately the invention has attracted the attention of anarchist and nihilist gangs from eastern Europe who will stop at nothing to steal this invention. They break into Saint-Cair’s laboratory, shoot the inventor and steak the plans for the device.

The 20-year-old Leo is not going to take this lying down however. With the assistance of his brave and resourceful chums from his local rugby club (and some aid from the French authorities) he sets out to smash the nihilist ring responsible for this outrage.

He goes undercover as a bomb-throwing nihilist, but in the course of his crusade he sustains the serious injuries that will eventually transform him into the Nyctalope. He will become a superhero with a powerful artificial heart giving him abnormal endureance, and the ability to see as well in pitch darkness in broad daylight.

This is great pulpy fun, with enormous plot holes but enough energy and outrageusness to allow the reader to ignore such minor trifles.

In writing this origin story de la Hire completely rewrote the chronology of his hero, so although this story claims to be set in 1912 the events seem more like to have occurred as early as 1897.

The story was adapted by Brian Stableford, a prolific author who interests extend from science fiction and horror to the literary decadence of the 1890s to the pulp fiction of the early 20th century. Black Coat Press have done a pretty fair job with the presentation of this volume. In fact one can’t really fault them at all.

This book provides a fascinating glimpse into the wold of the French pulp fiction and the even more obscure world of French literary superheroes. If you like your fiction overheated, breathless and pulpy with an emphasis on silly fun you can’t go wrong with this one.
Posted by dfordoom at 7:01 PM