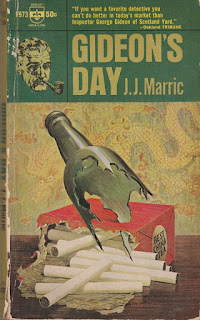 In 1955 John Creasey (1908-73), possibly the most prolific writer in history (with around 600 novels to his credit), wrote Gideon’s Day which was to be the first of his twenty-one Commander George Gideon crime novels. This series, published under the pseudonym J.J. Marric, is widely regarded as being his greatest achievement.

In the first book in the series George Gideon is still a superintendent with the C.I.D. at Scotland Yard (he later rises to the much more exalted rank of Commander). He’s a big man, generally very well liked despite occasional outbursts of temper. Being such a senior officer he doesn’t have much chance to get out on the street and do hands-on investigating. He’s more like a general, marshalling his troops, making sure the right jobs get assigned to the right officers, and making the decisions as to what share of the resources at his disposal should be plotted to each of the many cases currently under investigation.

This is not a traditional puzzle-plot mystery and it is also most definitely not a psychological crime novel. It’s more like a police procedural but with the difference that rather than focus on a single investigation we get to see the C.I.D. dealing with a multitude of cases simultaneously. The entire novel takes place over the course of a single day.

There’s a real focus on the seamy and violent side of London life in the 1950s - there are brutal murders, sex maniacs, dope fiends, crooked coppers, vicious assaults and a truly extraordinary mount of misery, squalor and despair. There is a popular theory that British crime fiction in the 50s was deeply affected by postwar pessimism and disillusionment and Gideon’s Day certainly lends support to that theory. At the same time it needs to be stressed that compared to many of the psychological crime novels of the era it does not wallow in the gutter to anywhere near the same extent and we don’t get treated to gruesome descriptions of graphic violence.

There’s also some focus on Gideon’s personal life. He is married with six children but while his marriage is by no means on the rocks it’s clearly not going as well as he’d like it to. He works very long hours and his wife Kate does make a few comments about jut how little time he spends with his family.

This particular day begins with one of Superintendent Gideon’s legendary rages. He has discovered that one of his sergeants has been taking bribes. He also has a series of mail van robberies to deal with and the Yard has so far made no progress at all on that case. Murder was certainly not a daily occurrence in 1950s London but this is a very bad day - an old woman is beaten to death, a child is murdered and there’s another death which Gideon fears may also be a murder. To cap it all off he has a problem with Birdy Merrick who is one of his most valuable informants - the problem being that someone is trying to kill Birdy. That cannot be allowed to happen - if the C.I.D. were to permit an informant to be killed they would soon find that no-one would be willing to provide them with information.

I personally prefer the puzzle-plot detective novels of the interwar years. Gideon’s Day tries very hard to be gritty and realistic and these are not qualities that appeal very much to me. Having said that I have to admit that if you do like this sort of thing then this is a very good book of its type. It’s also worth a look for its glimpses at the mean streets of 1950s Britain. There’s not much in the way of traditional detecting but there’s plenty of police procedural stuff. The most interesting thing about it is that all of Gideon’s successes are due to mistakes on the part of the criminals, which I suspect is pretty much how things are in real life.

While it’s perhaps not quite my cup of tea Gideon's Day offers a fascinating glimpse of day-to-day policing. The structure, with multiple simultaneous plot lines, works well and it’s entertaining. So it’s recommended, especially if this sort of thing is your cup of tea.

There was a 1958 John Ford movie based (very very loosely) on the novel. In the mid-60s ITC did a 26-episode television series, Gideon’s Way, based on the novels. The TV series is reasonably faithful to the feel of the novels but with a few small changes - Gideon’s family life is a lot happier in the TV series and he doesn’t succumb to his celebrated rages.
Posted by dfordoom at 6:21 AM