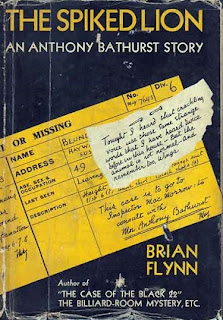 The Spiked Lion was the thirteenth of the fifty-odd Anthony Bathurst mysteries written by Brian Flynn. It was published in 1933. For those readers addicted to such things it contains a minor locked-room puzzle. And yes, there is a spiked lion in the story.

Not much seems to be known about Brian Flynn (1885-1958). He was an Englishman who worked as a government accountant and was also an amateur actor.

It starts promisingly enough. Two men disappear and are later found dead, apparently killed by cyanide administered through the nostrils. Oddly enough they also seem to have been badly beaten. John Blundell is an expert in cryptography while Hubert Wingfield is an authority on legendary inscriptions. The similarities in the circumstances of their deaths make it fairly clear that there must be some link between the two murders. The Commissioner of Police, Sir Austin Kemble, asks Anthony Bathurst for help. Bathurst is a private enquiry agent (Americans would call him a private detective) who has assisted Scotland Yard on other cases.

A note found on Blundell’s body strikes Bathurst as being likely to be a vital clue. Then a third corpse turns up. This killing has some locked-room elements to it.

I have to be particularly vague in discussing this book since even mentioning some of the subjects it touches on would reveal spoilers. I can at least tell you that while golden age writers were fond of mysteries with roots in the past this one takes that idea about as far as it can be taken - right back to a certain gift given by Pope Adrian IV (the only English pope) in the twelfth century!

Anthony Bathurst is not one of your more colourful detectives. Flynn was more interested in plot than characterisation (a priority with which I heartily agree). We do find out a few things about him. He’s very fit and looks like the kind of chap who could handle himself very well in a scrap. He’s a gentleman (Uppingham and Oxford). While he was keen on cricket and rugger at school he has fairly well developed aesthetic tastes. He likes cats. As a detective his great strength seems to be his thoroughness - he firmly believes that every piece of information, no matter how trivial it appears to be, is potentially important. He has the kind of mind that sees connections between things. When it comes to extracting information he can be rather direct and even a bit pushy if he thinks such an approach might work.

Flynn was not the sort of writer who tried to be ground-breaking. He had no interest in pushing the edge of the envelope or transcending the genre or any of that literary nonsense. This is a straightforward golden age puzzle-plot mystery. Which as far as I’m concerned is just fine. When it comes to plotting Flynn was certainly not in the same league as a John Dickson Carr or a Freeman Wills Crofts (or John Rhode on a good day). As far as quality is concerned he was a mid-ranking author - very competent and capable of telling a thoroughly enjoyable story of murder.

There is a touch of Edgar Wallace here as well. The dividing line between detective stories and thrillers was often rather fuzzy at this time. I like Edgar Wallace and the thriller elements here are reasonably well done so I see no cause for complaint.

Brian Flynn’s books are long out of print and reasonably hard to find. A couple of them (including this one) have been issued by an outfit in India that does print-on-demand facsimile editions. They’re infinitely preferable to most POD editions since being facsimiles you don’t have to worry about typos. And they’re fairly cheap. I’ve bought quite a few books from (they’ve issued a number of obscure golden age detective novels) and they seem to be very reliable to deal with. At this point in time they’re probably your best bet if you want to give Brian Flynn a try.

The Spiked Lion is actually pretty good. Not top-rank stuff but good enough that I’ve already ordered another of Flynn’s Anthony Bathurst mysteries. Highly recommended for fans of solid conventional golden age detective fiction.
Posted by dfordoom at 7:23 AM