Agatha Christie’s Evil Under the Sun 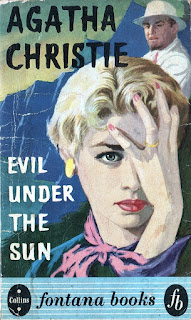 Given that I’ve just picked up a copy of Evil Under the Sun and I also have the relevant episode of the Poirot TV series I thought I’d try doing a back-to-back review of the novel and the TV version.

Evil Under the Sun was published in 1941 and it’s one of Agatha Christie’s most admired mysteries.

It has a classic setup. The Jolly Roger Hotel is located on an island (Smugglers’ Island)  just off the Devon coast. It is connected to the mainland by a causeway. The island is a private island, only accessible to hotel guests. It would certainly not be impossible for someone to gain unauthorised access to the island, in fact it would not even be particularly difficult, but it would be just difficult enough to make it exceedingly unlikely that the murderer could have been a random passing stranger. More importantly it would not be easy for an outsider to reach the island without being seen. It therefore fulfils the main purpose of a golden age mystery setting - it means that the killer must be a guest at the hotel.

For murder has indeed been committed on Smugglers’ Island. The almost unanimous view of the guests is that the victim is the sort of woman who was extremely likely to get herself murdered, and that despite possessing fame and wealth she is not exactly going to be a great loss to the world.

Whatever her personal failings may have been murder is still murder, and Hercule Poirot takes murder very seriously. Poor Poirot should have known better - if you’re a famous detective and you decide to take a holiday you can be almost certain that your chosen holiday spot will also be chosen as a venue for a murder.

In this instance at least the murder does not take Poirot by surprise. He had more than half expected it. The situation surrounding the woman in question seemed to be tending inevitably towards some kind of disaster.

There’s no shortage of suspects and there are several perfectly plausible motives. Most of the suspects have alibis but if you’ve read plenty of detective fiction you’ll notice that the alibis are extremely complex, which is always a bit suspicious.

As I said earlier this is a book with a glowing reputation and at this point I’m going to confess to heresy. I was not overly impressed by this book. 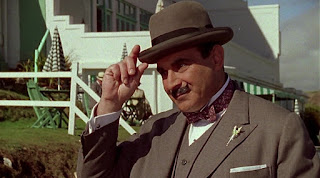 With a golden age detective story you’re prepared to accept far-fetched and incredibly complicated and contrived solutions. The fact that they’re far-fetched and incredibly complicated and contrived can even be seen as a bonus, as long as three conditions are fulfilled. Firstly, once the solution is revealed your response should be that it’s outrageous but of course that’s how it must have happened. Nothing else would really make sense. In this case my reaction was that the solution did not ring true at all. It was simply ludicrous. It relied too much on luck and on the reactions of other people fitting in neatly with the plan. Not even the craziest killer would adopt a plan which was so hopelessly over-complicated that it was clearly doomed to failure.

The second condition is psychological plausibility. You have to be convinced that the murderer might just possibly have been capable of murder. In this case I felt that Christie cheated just a little in the way she presented several key characters to the reader. I didn’t believe their motivations at all.

The third condition is that the reader has to believe that based on the evidence available to him the detective could really have solved the case. In this instance I felt that Poirot pulled a rabbit out of a hat. There are some huge intuitive leaps. OK, Poirot is always inclined to make intuitive leaps but in this book the leaps seem more outrageous than usual.

This is typical Christie in many ways. It’s a spectacular display of plotting pyrotechnics. There is some very clever stuff with alibis. It’s all very ingenious. It’s just that the pyrotechnics are over-complicated and inherently unstable. The danger is that when the pyrotechnics are detonated the whole plot is likely to explode in mid-air. Which, in my view, is what happens.

I know it’s supposed to be one of her masterpieces but I’m afraid I’m not entirely convinced. Evil Under the Sun just did not quite work for me.

The TV Adaptation
The television adaptation in the Agatha Christie's Poirot series went to air in July 2003. 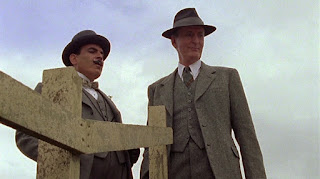 It is reasonably faithful to the book. The changes are mostly fairly unimportant. Captain Hastings and Miss Lemon are added to the story, which is no problem. Hastings is always useful - he provides Poirot with someone with whom to discuss important plot points. The local Chief Constable featured in the book is replaced in the TV version by Chief Inspector Japp, which again is no problem. In a TV series it’s obviously very advantageous to keep the same recurring characters.

The only significant change is that one character who is female in the book becomes male in the TV episode. I can see why they thought this change strengthened the plot although in my opinion it actually weakens it slightly.

The hotel of the novel becomes a sort of health farm in the TV adaptation which adds a few comic touches as Poirot copes very badly with being put on a healthy dietary and exercise regimen.

As always in this series the visuals are magnificent. The Burgh Island Hotel in Devon stands in for the Jolly Roger Hotel on Smugglers’ Island and it’s a wonderful location. The tractor ferry is a lovely touch.

If you enjoyed the novel more than I did (and almost everybody seems to fall into that category) then it’s quite likely you’ll like the TV version more than I did as well. There's nothing wrong with it as an adaptation, unless you're eccentric enough to share my doubts about the plotting.
Posted by dfordoom at 4:22 AM