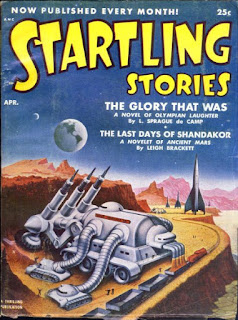 The Last Days of Shandakor is a novelette by Leigh Brackett. It first appeared in the April 1952 issue of Startling Stories. It’s typical of the very best of her sword-and-planet tales.

It’s set on Brackett’s Mars, a once-green planet that is now mostly desert. The great Martian civilisations, civilisations that were ancient aeons before the beginning of recorded history on Earth, have fallen into decay. Most have vanished almost entirely, leaving just a few tantalising traces.

A planetary anthropologist from Earth, John Ross, encounters a man named Corin. Corin fascinates him because he seems to belong to no known surviving race. Corin claims to have left the dying city of Shandakor, a city as unknown as the race to which Corin belongs.

Corin wants to return to Shandakor and John Ross, realising that he could be on the brink of discoveries that could make his professional reputation, wants to accompany him.

Shandakor is a city that knew times of greatness. Now it is dying, or is it already a dead city? It depends on what you mean by dead. What John Ross finds is a shadow of that greatness but it’s a very peculiar shadow.

This is the sort of thing that Brackett did supremely well. It’s a story that relies absolutely on mood and it’s a mood of loss, of melancholy, of doom both feared and welcomed. There is physical death, and there is the death of the will to survive.

Brackett was obsessed by the idea of lost civilisations and the death and decay of civilisations. She was obsessed by what might be called the idea of historical deep time, of the past as something incredibly vast and majestic and terribly sad. It’s a subject she approached with sensitivity and compassion but without sentimentality. Civilisations live and they die, that’s just the way things are. men live and they die as well. There is a time to die.

This novelette is included in the excellent Gollancz Fantasy Masterworks volume Sea Kings of Mars.

The Last Days of Shandakor is one of Brackett’s most successful stories. Very highly recommended.
Posted by dfordoom at 12:11 AM