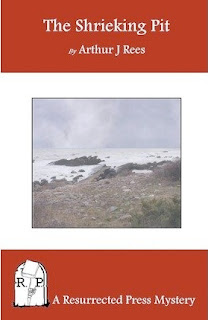 Arthur J. Rees (1872-1942) was an Australian crime author who enjoyed considerable success in the years between the wars, winning the approval of such luminaries as Dorothy L. Sayers. The Shrieking Pit is one of his early mystery novels, appearing in 1919.

The story takes place in Norfolk in 1916. The famous private detective David Colwyn is enjoying a holiday. Colwyn is American-born but explains that he is half-English and has lived in England long enough to have become somewhat acclimatised. The actual story begins with an odd occurrence in the dining room of the Grand Hotel in Durrington. A young man is behaving in a slightly disturbing manner. Colwyn is mildly concerned but one of the other guests, obviously a medical man, is seriously alarmed and persuades Colwyn that immediate action needs to be taken if disaster is to be averted. They escort the young man, who has now fainted, to his room.

Since the medical man turns out to be distiguished Harley Street nerve specialist Sir Henry Durwood his opinion carries considerable weight and in his view the young man is not merely an epileptic but subject to a particular form of epilepsy that can lead to sudden episodes of extreme violence.

The young man is James Ronald who has been invalided out of the army with shell-shock (we later find out that his name is actually James Ronald Penreath). He seems to have made a complete recovery after the incident in the dining room and assures Colwyn and Durwood that he requires no further assistance. The matter seems to be closed.

The following day there is much excitement in the Grand Hotel - a murder has been committed in the nearby village of Flegne-next-sea and the police are hunting a suspect who bears a remarkable resemblance to young James Ronald. Colwyn and Sir Henry immediately set off to see the Chief Constable. Colwyn happens to be personally acquainted with the Chief Constable and finds himself unofficially invited to assist Superintendent Galloway in his investigation.

The murdered man was a well-known archaeologist, Roger Glenthorpe, who had based himself at the Golden Anchor Inn at Flegne while engaged in important fieldwork nearby.

The evidence is entirely circumstantial, but very convincing. The body was found at the bottom of a thirty foot deep pit known locally as the Shrieking Pit. It was a kind of Stone Age mining shaft but now it’s associated with the local legend of the ghostly White Lady - if you see the White Lady you will be dead within the month. The very clear boot prints leading to the pit are the icing on the cake - surely James Ronald must have been the killer. There are lots of other pieces of evidence that all point in the same direction.

What’s most interesting about this book is the ambiguity of the evidence. In fact it forms what might be considered to be the theme of the book. There are many items of evidence that point to Penreath’s guilt, but every single one of them is ambiguous. Superintendent Galloway is satisfied and the evidence might well satisfy a jury as well but Colwyn isn’t happy. He sets out to look out for new evidence. He finds plenty of it - but it’s all ambiguous as well! His new evidence could totally demolish the Crown’s case but if viewed from a different angle it could just as easily place Penreath’s guilt beyond any shadow of a doubt. This is the reason for the constant tension between Colwyn and Superintendent Galloway - they’re both interpreting the evidence in the light of their own theories about the crime.

The book also has quite a bit to say about madness, responsibility and the law. Penreath’s legal advisers in despair over the apparently overwhelming evidence against him, put their hopes in a plea of temporary insanity, with Sir Henry Durwood’s evidence being crucial. The medical evidence is however just as ambiguous as all the other evidence.

There are countless clues. Many of them are quite clever and all are important. The plot is more complex than initial appearances suggest and the themes of ambiguity and the danger of judging evidence based on preconceived notions recur again and again.

The setting is also a major plus. Flegne-near-sea is a decaying and dying village, doomed to be swallowed up by the ever-encroaching marshlands. There is nothing picturesque about this village - it is more like a rotting corpse. The Golden Anchor is a dying inn in a dying village. When you add the ominous legend of the White Lady and the presence of somewhat creepy Stone Age ruins you get a certain stifling and slightly gothic atmosphere that works extremely well. This is not like the theatrical gothic atmosphere you strike in some of John Dickson Carr’s books - this is more sombre and low-key but just as effective.

The war plays an indirect but interesting role. The village of Flegne is dying anyway but the war has hastened its demise. The author seems to have a somewhat sceptical view of a great many sacred cows (such as the jury system), which he expresses in an amusingly sardonic way. He is particularly savage on the subject of the Home Front, taking great pleasure in mocking those who, knowing they will not have to do any actual fighting or take any actual risks, nevertheless welcome the war as a means of advancing their social standing, their petty exercise of power or their political views.

Rees can be just a tad long-winded in places. I’m not sure that the trial really needed to be recounted in quite so much detail.

All in all though there’s a fine plot, a nicely atmospheric setting, a few hints of the gothic and some food for thought on the subject of circumstantial evidence! I found this one to be thoroughly enjoyable. Highly recommended.

His 1920 mystery The Hand in the Dark is worth seeking out as well.
Posted by dfordoom at 2:32 PM