The City of the Living Dead 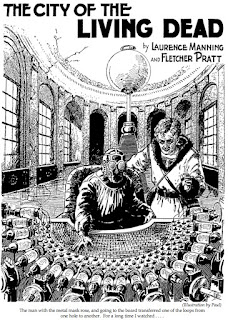 The City of the Living Dead, a short story by Laurence Manning and Fletcher Pratt originally published in Science Wonder Stories in 1930, has sometimes been claimed as an influence on The Matrix. In fact the story incorporates a number of concepts that would later be hailed as revolutionary when the cyberpunk writers rediscovered them half a century later.

The world of Alvrosdale is a very small world. It is a close-knit agricultural community, presumably somewhere in northern Europe. Alvrosdale is entirely cut off from the rest of the world and has been for a couple of thousand years. It was cut off suddenly and completely by a geological cataclysm that raised an impassable mountain barrier.

The people live what might seem to be a primitive life, without machines of any kind. In fact they hate and fear the very idea of the Machine. They are aware, in a vague way, of the existence of Machines and have an even vague awareness that elsewhere in the world the Machine has reached an extraordinary degree of sophistication, fueled by a demon the people of the dale fear above all else - the Demon Power.

Each year a number of young people set off in their gliders (gliders are allowed since they have no connection with the Demon Power) to cross the mountain barrier. Before they leave the wise old Hal Hallstrom tells them his story. It is an incredibly story of what he found in the lands beyond the mountain.

He found a world dominated by the Machine, but a dead world. Not quite dead though. Something worse than dead. A living death. And he discovers that the people of Alvrosdale have good reason to fear the Machines. The Machines are not evil in themselves but they lead to evil results. 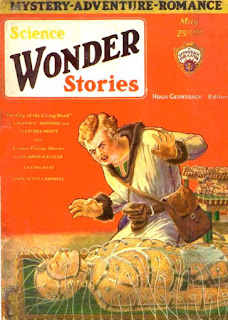 One of the many ideas that Manning and Pratt anticipated in this tale is virtual reality. It is not just a vague approximation to the idea - it is the idea fully developed, in some ways perhaps even more fully developed that anything to be found in the cyberpunk writers. This is not virtual reality that mimics life - it replaces life. Cyborgs are also anticipated in this story and again the idea is impressively well thought through.

Science fiction authors are sometimes good at predicting technologies but not so good at predicting the social consequences of those technologies. Very few science fiction authors have been successfully able to imagine just how trivial and futile would be the uses to which human beings would put advanced technologies. In this instance the authors cannot be accused of this failing - the self-destructiveness of technology used purely for pleasure and amusement is vividly described. Manning and Pratt would not have been the slightest bit surprised by the tragic misuse of the internet.

This is very much ideas-based science fiction with absolutely zero interest in characterisation. I was going to say that it displays zero interest in emotion but that’s not quite true - it displays no interest in individual emotions but it does deal in at least general terms with the emotional and psychological consequences of unlimited access to unlimited power and technology.

The City of the Living Dead would have been an impressive enough achievement had it been published thirty years later, but appearing as it did in 1930 it’s breathtakingly prescient and a truly remarkable work of speculative science fiction. Highly recommended.
Posted by dfordoom at 7:55 AM