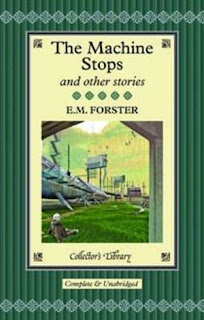 When we think about the pioneers of science fiction E. M. Forster is not exactly the first name that springs to mind. He wrote just one science fiction short story, The Machine Stops, published in 1909. It is however one of the greatest science fiction short stories ever written. It has been credited as being the first story to predict the internet, and social networking. And with some justification. It is also an uncannily accurate prediction of most of the characteristics of early 21st century life.

The Machine Stops is the story of Vashti, a woman of the distant future. Humanity now lives underground. All want has been eliminated. There is no hunger, no injustice, there are no shortages, there is no pain or suffering. Everything is provided by The Machine. Civilisation has progressed so far that it can be said that it has more or less reached a state of perfection. The Machine not only provides everything; it knows what people want. Anything not provided by The Machine is clearly unnecessary, and not merely unnecessary but harmful.

Vashti has a rich social life. She has thousands of friends. Of course she has never met any of these friends in person, in the flesh. The very idea of meeting people face-to-face terrifies and horrifies her. And there is no need. She can talk to any of her friends at any time she chooses via a view screen. To travel somewhere to meet people would be both absurd and frightening. Why would anyone want to do such a thing? As she tells herself, what was the good of going to Peking when it was just like Shrewsbury? Why return to Shrewsbury when it would all be like Peking? In an early and much more primitive stage of civilisation scientists had made the mistake of thinking that progress meant being about to take people to things. Now it has been realised that it is much more satisfactory to take things to people. Why suffer the inconvenience and hazard of going to look at the sea when the sea can be brought into one’s room via a view screen? If you want to learn about something one can do that much more efficiently by means of a lecture, and to attend a lecture it is not necessary to leave one’s room. One simply presses a button. Lectures are a favourite pastime of humanity in this civilisation. Vashti herself  delivers lectures on the music of the Australian Period. (This aspect of the story can without too much of a stretch be seen as an anticipation of blogging and podcasts).

The one disturbing element of Vashti’s life is her son Kuno. Kuno is a misfit. For one thing he has shown disturbing signs of physical strength. He can stand up on his own for minutes at a time and can even walk short distances. On his own feet! Such physical prowess is recognised by The Machine as being not merely unnecessary but dangerous. The possession of such useless abilities might unsettle people. Kuno has also displayed a disturbing interest in going outside. Not just outside his room, but right outside, onto the surface of the Earth. This is not technically illegal but it is frowned upon as being unhealthy and Unmechanical. And to do so without a permit, as Kuno has done, is most certainly illegal. Vashti has always been rather fond of Kuno but now she is beginning to realise that it would be better to have as little to do with him as possible.

Worst of all, Kuno has voiced the opinion that The Machine might one day stop. Ridiculous of course but even to contemplate such a thing is frightening and upsetting.

Vashti is beginning to find life quite upsetting. She has even considered euthanasia. Naturally in a world in which pain and suffering have been outlawed euthanasia is an option, although equally naturally it is not an option people can choose for themselves. It can only be chosen for them by The Machine, which is of course only right and sensible.

And things are about to get a good deal worse for poor Vashti.

Forster did not of course predict the actual technology of the internet. He simply extrapolated from the technology that existed in 1909. Telephones, the telegraph, gramophone records, motion pictures all existed. Radio had recently been demonstrated to be practicable. The mass media existed in the form of mass-circulation newspapers. Forster drew the obvious (but for 1909 very bold) conclusion that the future would see instantaneous global communication. The exact technical means by which this would be achieved was of no interest to him. What is truly extraordinary is how right on the money he was in predicting the social consequences of these developments. His future civilisation is a world of atomised isolated individuals entirely cut off from reality, and terrified of reality. They have the illusion of having thousands of friends but it is only an illusion. They have sophisticated means of communication but nothing to communicate. Any hint of actual emotion reduces them to panic. It is eerily similar to our world in which everything must come with trigger warnings, and in which absolute conformity is self-enforcing.

Forster also accurately predicted the inevitable destruction of family life and the rise of the Nanny State. The Machine is the Nanny State writ large.

Forster wrote his story partly as a reply to the socialist utopianism of the science fiction of H. G. Wells. Again Forster proved to be eerily prescient. The Machine Stops is an interesting anticipation of the soft totalitarianism of Aldous Huxley’s Brave New World. The word totalitarianism did not even exist in 1909 but Forster could see that utopianism leads inevitably to rigid conformism and the abolition of freedom and human dignity. Forster seems to have belonged to the tradition of English intellectuals who viewed industrialism with suspicion, a major theme of this story being the dangers of becoming cut off from the natural world and dependent on technology. In this respect it again anticipates the anti-consumerism and the scepticism towards capitalism of Brave New World. There’s even a hint of the use of drugs and mindless hedonism for social control that figures so prominently in Huxley’s novel.

Yet another prediction made in this story is the rise of substitute secular regions, in this case the worship (literally) of The Machine.

The Machine Stops is an extraordinary vision of a future that has turned out to be all too depressingly accurate. If there’s a weakness in this story it’s the fact that Forster still saw reason for hope. One of the masterworks of dystopian science fiction. Very highly recommended.
Posted by dfordoom at 8:43 AM